I have one, but he currently resides in a box. We remodeled our guest bathroom from “Che Flamingo” to “New everything and classy looking”. All the flamingos came out.

But then we moved to a new house! New guest bathroom is decorated in half flamingos (just pictures) and half unicycling pictures. The uni toilet paper guy would go good in there, so I may consider doing the “upgrade”. If I can find that guy. Lots of boxes!

Why flamingos, you say? It’s a long story, but short version is that all Miyata unicycles were called Flamingos (their giraffe was Long Flamingo). Flamingos stand on one leg so I guess that’s why they chose that bird…

I also have the paper towel version of that guy. No place to put it up in our new kitchen so it’s currently also in a box. Unless it’s still at the old house…

I’m always astounded at how tolerant Jacquie is.

I have one to, unused: as the houselord -a unicyclist to- does not allow drilling in the wall.

I’m always astounded at how tolerant Jacquie is.

She has her limits. Let’s just say she’s okay with our new house not having any “rolled paper guys” on display.

Roll needs turning the other way, so the poor chap can ride forwards

Roll needs turning the other way, so the poor chap can ride forwards

But then the toilet roll would be backwards…

But then the toilet roll would be backwards…

Exactly. But also one other reason. He doesn’t like to ride forward. This causes his wheel to push to one side or the other, and then usually tearing most forms of toilet paper. Alas, he was meant to ride backward. He understands, like too few humans, that there is only one right way for the paper to come off the roll!

It took me a long time to find it, but here’s my paper towel unicycle guy. The sexy models are David Poznanter on the left (his is that odd name that was attached to “Profile” on the Profile Poznanter splined hubs). On the right is Bruce Bundy, a super-stud Muni rider back in 1998, when this picture was taken. Yes, it’s on film! More than a year before I got my first Digital camera. 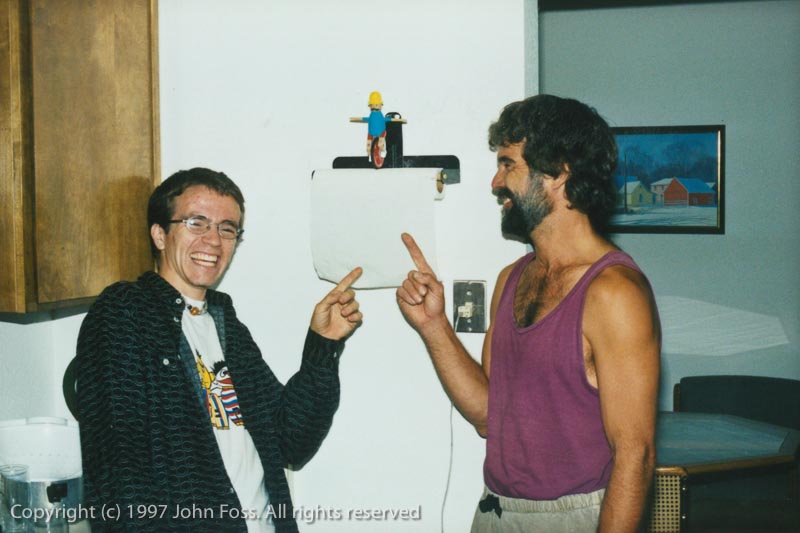 :pI’d say he is riding it clean, but he is not rolling it. He doesn’t go anywhere until you roll it – he’s a guy strapped to a treadmill.

In actual unicycle riding, there are probably more nuances to rolling something. Does “unweighting” count? That is, where you do a hop but the tire never leaves the ground? I think repositioning hops would not count for “clean” rolling, no matter how you did them but unweighting should. Measured by whether the tire loses contact with the ground.

I have this great little video clip of an example of unweighting, taken by Ann O’Brien at NAUCC. It’s slow motion of me riding up a curb in the Cyclocross race. But for some reason Smugmug wouldn’t accept it for upload…

I am looking to purchase one of these toilet paper unicyclists as a gift for my aunt and uncle. They had a very similar TP-Cyclist in their downstairs bathroom when I was growing up, but they lost it when their house was destroyed during Hurricane Sandy. If any of you have any leads on where I might be able to find one I would sincerely appreciate it.

Also, I still haven’t found that unicycle paper towel holder. It’s probably wedged in a large box of odd-shaped items from our move in 2015. I’ve probably looked in the box, but not dug deep enough to locate it. I now have a green light to put it up in the kitchen, mostly because our counter-based holder sucks…

looking to purchase one of these toilet paper unicyclists as a gift for my aunt and uncle.

My house was never destroyed. But still I have no, and prices are continiously skyrockening.
So I have one stored for years, waiting for my first house…
Maybe that one could make your aunt and uncle more happy, in stead of sitting in a movers-box.
Sounds like a better destination.

Post or PM me what you’re willing to pay.