This was the most physically tough video to make so far 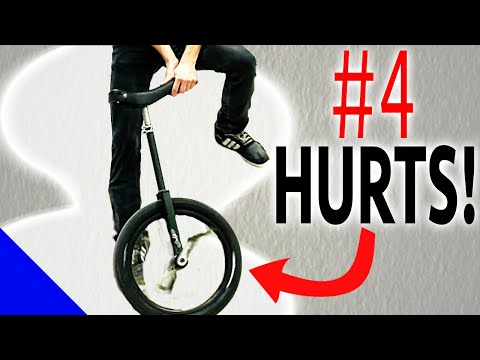 Thanks for sharing that. As an older rider, who learned to ride in the 70s, became a Freestyle champion in the 80s and a decent professional performer in the 90s, I learned a lot of hard Freestyle tricks, but nothing as risky as all that aerial spinning/flipping/shin-risking stuff. Because a 1990s unicycle would break after about a half hour of even trying that stuff! I can honestly say with no embarrassment that I don’t think I will ever attempt any of those moves myself, and not feel bad about it.

Much respect to all of you who do.

Now to try to figure out some of my “hardest” tricks, all of which would be considered in the Freestyle category. One of the earlier ones I remember taking forever to master was Backwards Wheel Walk One Foot. Pretty pedestrian by today’s standards. Or a One-Foot spinning mount to one-foot riding (other foot never touches the pedal). Backwards coasting, One-footed figure-8 backwards with non-dominant foot (yes, I had a good reason to spend time on that). Huh. All pretty mild by today’s standards…

Ok, thanks, that makes sense. I hope to become an insider one day but that won’t be for quite some time.

me too but now I’m working on the outspin.