Spoke problem I am having trouble fixing [FIXED! IT WAS CRANKS!]

While I’m new to the whole idea of wheel maintenance and building, I’m quite interested. I have a 24" and 27.5" Nimbus MUnis. I change cranks and pedals on them, and have all of the appropriate tools.

On the 24" I noticed some creaks and pings. I checked cranks and pedals and it wasn’t any of that. I can safely rule those out. I changed pedals and checked everything with the cranks. No issues. Even changed cranks since then. And I found loose spokes. Ah, that’s the problem.

So, I ordered a spoke tension measuring tool, a spoke wrench, and a truing stand. I know I don’t need all of that, but hey it is interesting to learn this stuff.

I removed the tire and tube, and labeled all the spokes. On the truing stand I began to measure tension, and tighten offending spokes by 1/4 turns until they were all in the relative same tension range. Okay, everything seems tight, and just for kicks I measured the relative tension, and everything was fairly even. I won’t mention tension numbers at this point, because I think all that probably matters is that they are in the same ballpark. And maybe I’m wrong there, I’m not sure. Oh, and the wheel spun true, and was never really wonky. There wasn’t much to fix, if anything, in that area.

Everything stayed quiet for about two weeks, and now the creaks are back. Does anyone have any idea what may be the problem? I’m a big guy and do a lot of hopping MUni-ish shtuff.

Thanks in advance for any insight.

Assuming the issue is that some of the spokes are coming loose I would say that its most likely an issue of not enough spoke tension.
You mentioned that the relative spoke tension was correct and that is obviously important - but the effective spoke tension also have to be high enough to keep proper tension when the wheel is under load.
Also when tightening spokes I always tighten them and then do approx 1/4 rotation in the opposite direction to make sure the spoke itself is not being twisted.

I suspect your spokes have worn intents into each other at the crossings and now are clicking in and out of those indents.

Sadly the only fix for that is new spokes. Grease doesn’t work (I also had this issue on a unicycle many years ago).

I would recheck the tension. You’ve probably already done this, but after you build a wheel it will change once you ride it awhile. After a couple of adjustments things should stabilize.

I’d also give everything a good twist and pull in various directions and check all your bolts for tightness. I just make inspecting it that way about a weekly occurrence, or more often than that if I’m hearing noises or feeling clicks or wobbles when pedaling. Sometimes it can be tough to identify the exact source of a noise.

I suspect your spokes have worn intents into each other at the crossings and now are clicking in and out of those indents.

Sadly the only fix for that is new spokes. Grease doesn’t work (I also had this issue on a unicycle many years ago).

Couldn’t he disassemble and rebuild the wheel with the spokes on opposite sides? That way the worn indentations would not be facing each other.

Couldn’t he disassemble and rebuild the wheel with the spokes on opposite sides? That way the worn indentations would not be facing each other.

That won’t work. Besides if you take the job of rebuilding the wheel, the spokes are not a big expence

In a standard spoked wheel, I’m pretty sure spokes all cross and touch in the same position, on the opposite side to the J-bend.

Now that I think about it, it’s obvious that you are right about this.

@Hammer Awesome, thanks for the notes. What I am nervous about with this, though, is what tension values to aim for. Like, all of my spokes were in the 15-25 deflection/tension reading (TC-1) range.

@Unigoof Thanks for the note. With regards to relieving tension - is this where you put the wheel on the ground and sort of do a push up on it for each side? I did not do that part. Is that what you are referring to?

@mowcius Thanks for the note. I don’t think the spokes are worn like that. I could be wrong. I’ve had this wheel two months. I’ve used it a ton in that time, but man, thats not that long for spokes to wear like that - or at least that is my gut feeling.

And just FYI in case it wasn’t clear - I didn’t build this wheel. It came on a Nimbus 2 straight from UDC.

Thanks everyone! I’m gonna tinker more with it.

Well that is one way to stress relieve, but it has a high risk of bending the rim and actually doesn’t put much stress on the spokes. What you should do is grab two parallel spokes with your hands if the wheel is big enough or with the handles of pliers if it isn’t and squeeze as hard as possible. I’ll see if I can find the video that was shared on here.

Thank you. I did watch some videos already on relieving spoke tension. I did find a few methods. I’ll do that as I re-tighten and check. 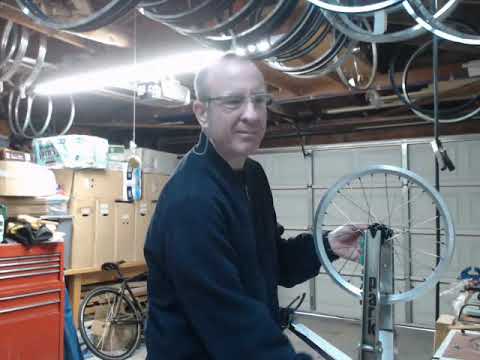 This is what @mowcius posted to this forum and I really like the method.

Awesome I’ll check this out in a bit. Thank you!!!

Somethings still not right and I fear my very basic skills need help. I’d take it to a repair shop, but the nearest is over an hour away, and I’d like to learn this anyways.

Alright, I redid the process of trying to work on the spokes. I did relieve tension this time as I went. It seemed to relieve the tension based on spokes pinging a bit as I did it.

I rode for about 2 hours and it all just came back. Here is a video that hopefully captures the noises I am hearing. Again, pedals and cranks seem 100% just fine. I switch pedals and no change. Cranks are tight and all UDC tools and spacers (with calipers) are being used to install/change them. I also work on another (equally ridden) unicycle that has no issues as far as pedals and cranks.

Thanks in advance for any insight.

To me it sounds clearly like spokes, but I have no idea. The bearings seem fine from a glance and a spin.

EDIT: It only makes the creaks when weight is on it. Not sure if that helps.

My guess is cranks (that is what it sounds like to me). Try putting your weight on the unicycle without using the cranks (wheelwalk maybe, or just generally pushing onto the unicycle.) If it still makes the noise, it’s not crank/pedal related.

Try pushing/pulling on just the crank hard with your hands, if you can get it to make noise, it’s probably the cranks.

Good ideas that I need to try. I just tried to push and pull the cranks with my hand and couldn’t reproduce it, but it takes more force I believe.

I guess I just would like to hear more about how it might be cranks. Like, loose cranks? Doesn’t the sound in the video sound spindly and high pitched? To me it screams spokes, but again, I’m new to this.

Unless I’m crazy and missing something, I don’t understand how the cranks could be loose. I think that would be an obvious thing to tell.

As far as seat post, I feel this noise through the pedals. Again, maybe I’m crazy but I just don’t feel like its the seat post.

This is the conversation I need though, so don’t be offended. I am welcoming any ideas or suggestions.

Hang on hang on. I used even more force on the cranks with my hands. Geeze I think you are right.

What is going on with them??