Set it to cruise-control!

Has anyone ever tried to coast their unicycle? As in, forget that you are on a unicycle and just stop pedaling? I have, now. It was the weirdest damn thing, just curious whether I am alone in this kind of lapse of awareness. Kind of like falling asleep at the wheel, but fewer consequences. Fortunately my reflexes did their job. Keep pedaling everybody! (everybody without a freewheel…)

I did a similar thing once. I was stepping off the uni to wait for traffic, and took both feet off at the same time and just sat there. Well I wasn’t just sitting there for long, I fell and my right foot landed on the pedal on the way down, sending the left pedal into my calf. There are people that can coast a uni though, @JackSebben_Unicyclist has a whole video on it I think and Mimo Seedler also has videos of coasting, among many other devoted urban unicyclists.

I think @Daviddaniel meant that he stopped pedaling and tried to coast with his feet still on the pedals, like one would do in a bike with freewheel. I can imagine that feeling might be similar to driving a car with an automatic transmission immediately after driving a car with a standard transmission, and while encountering a red light at an intersection, lifting your foot off the accelerator and your other foot off the floor, and then slamming the “other foot” down on the brake, because your brain was telling that “other foot” to press the clutch to the floor so the car could coast.

Doing that on a fixed unicycle would certainly send you straight off the unicycle like a cartoon character, with the only recovery being to “run it out”.

Did I understand you correctly, @Daviddaniel?

Never on the uni but I have a fixed gear b**e and it’s happened a few times. It’s a weird feeling, you’re being kicked (and almost lifted!) by the ascending pedal.

I’ve done the same as Unigoof when going to dismount. It was a seriously weird feeling just being perched there and not something I desired to repeat. The uni had no brakes but fortunately it just slowed down and I was able to jump off the front without falling.

I am alone in this kind of lapse of awareness. Kind of like falling asleep at the wheel

You are not alone, I regularly find myself experiencing this after an hour or so of riding and usually take a break before something inevitable & painful happens.

I think you hit the nail on the head. I probably spaced out and thought I was “driving my old car” (or bike), as I was approaching a gentle slope on a nice path in the woods. But I’m not a new unicyclist and it’s funny that this is the first time this has happened! It was like a UPD only moreso

Has anyone ever tried to coast their unicycle? As in, forget that you are on a unicycle and just stop pedaling? I have, now. It was the weirdest damn thing, just curious whether I am alone in this kind of lapse of awareness. Kind of like falling asleep at the wheel, but fewer consequences. Fortunately my reflexes did their job. Keep pedaling everybody! (everybody without a freewheel…)

I did this once many years ago when most of my rides were on a freewheel unicycle and I rode a fixed wheel unicycle on a ride. I was focused on crossing a small bridge on the trail. I pedaled fast to gain enough momentum to brake coast over the bridge, set my feet, and the wheel popped out from under me. I had to climb down to retrieve my unicycle from under the bridge.

The UPD didn’t happen in this video, but you can see the bridge I mentioned at the 00:53 mark: 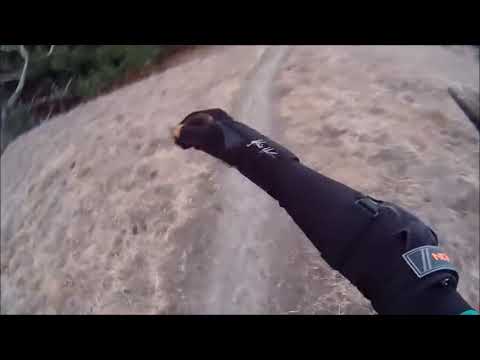 I think most freewheel riders have tried to do this at least once when going back to a fixed wheel.

Glad it wasn’t you that wound up under the bridge!

Yeah I had that too once. Because of a bump both feet lifted off the pedals and couldnt find them again. Somehow I was balanced correctly on the seat coz I stayed perched there. It felt very strange. But willingly trying to do that again is something else. Kinda scary

Happens to me all the time
wow its the weirdest thing

Not the same thing, but the other day I rode down a mountain with a group that included a guy on a freewheel that coasted down incredibly steep and gnarly bits of singletrack. What a beautiful thing to watch!

That was at Chamrousse, a town and ski resort in France. We were a group of unicyclists in the “Advanced” group on this non-competitve ride down the mountain. Starting from 2250 meters, we rode down to the town of Saint-Martin-d’Uriage, maybe 100m above sea level. Chamrousse was the site of the Downhill, Slalom and Giant Slalom at the 1968 Winter Olympics. Now it also has a great mountain bike park for the summer season. This is followed by some very steep singletrack on poofy, dusty dirt with lots of rocks and roots. Woo!

Yes a few more times than I care to admit. I’m a pretty new rider that does a lot of cycling and legs getting tired from not putting enough weight in the seat and my brain says rest them and coast don’t work well lol

I’ve had it once on my 36 that I forgot that I should keep balancing. I just let the pedals go round “unattended” with my feet on them. That was a upd, luckily my armour saved the day

Sounds epic! Mind is blown by the image of the freewheel guy - super impressive.

It happened to me a few times when I was starting freewheeling, but it doesn’t happen to me anymore.

This is a thread for @Maxence !

Oh, dear! All the time. It’s dangerous and frustrating.
I often ride a freewheel and my brain doesn’t want to go back to fixed uni. When I try to pedal fast on a fixed uni, my brain tells me to stop pedaling because, hey, I can simply let the wheel turn and brake coast. But that does not really work. I usually just stop - brake coasting a few meters until my feet reach the ground - but sometimes I crash. I have to build my confidence again on fixed wheels and maybe specifically train for that purpose… Or just go full freewheel and buy a freewheel Schlumpf hub

The strangest thing is that it is not consistent. Sometimes, I can go over 30 kmph… Then my brain turns on and I have to stop. Then, for the next kilometers, I can’t go faster than 15 kmph - which, for me, is very slow…

I never thought there was upside to only riding unicycles. { No bicycles }
Until I read through this post in its entirety.
Apparently, there is. I never try to coast my Uni {:>)