I got my first unicycle recently as a gift, and I don’t want to seem ungrateful or anything…but I’m convinced it’s a very poor quality…

The seat post is constantly moving around from side to side, usually while pedalling, but mostly when I fall, and the rim of the wheel already seems to be warped.

On 3 occasions I’ve had to readjust the height because the post gradually slips, until it’s digging in to the wheel and I can’t pedal.

I guess I need to know if I’m just doing it wrong and these are common problems that can be remedied with more practice, or if all the practice in the world won’t make riding an unstable, not finely tuned uni any easier.

What is the uni? If you don’t know can you take some pictures?

Your seatpost clamp might be too lose. Also your wheel might not be true, which can be solved by adjusting spokes with a spoke wrench.

Pictures will help us help you

Well the seat post thing is certainly equipment related, not something that goes away with practice.

As far as I can tell it doesn’t have a brand name.

On second inspection it appears to say Justek, or Sustek under the seat, and a big old Made in China sticker next to it.

I think I just answered my own question.

Ok, so here are a couple pictures, sorry for the poor quality.

The one that is the hardest to make out is the bushing on the seat post clamp-you can see that the handle was so tight it deformed the bushing. 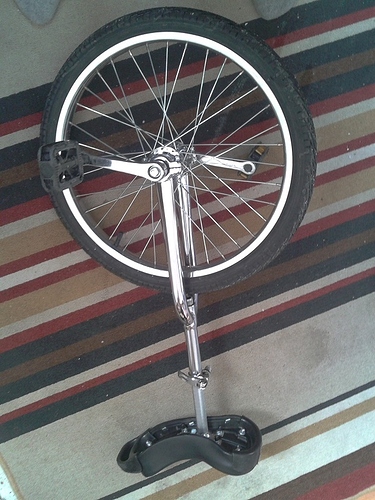 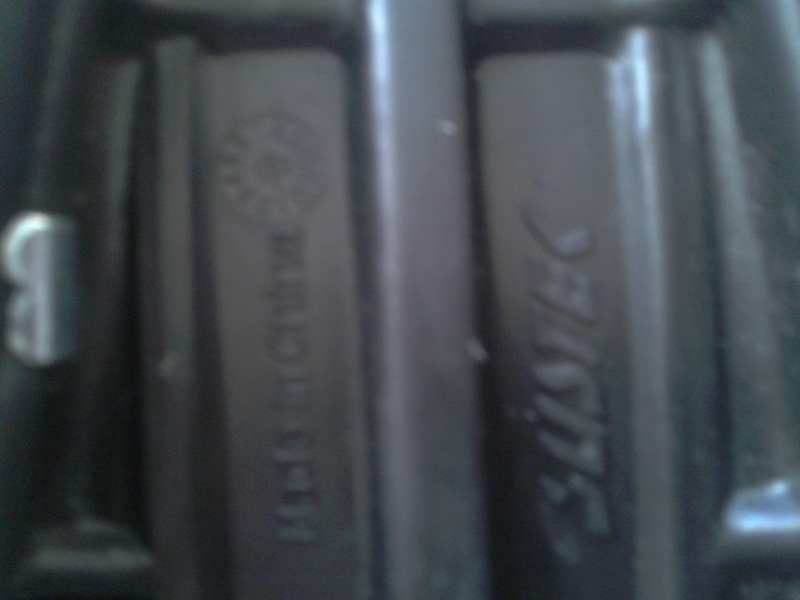 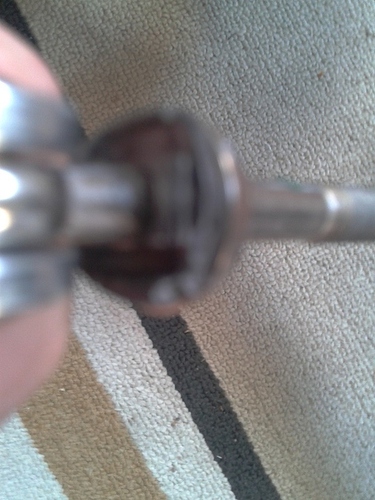 So you know that your seat was made in china (most of the unicycle gear is made in eastern countries) and that the seatpost-clamp is crap.
New clamp and your problems may be solved for now. I expect that you want to change the seat as soon as you start really putting weight on it.

Everything else may be good enough for a training uni, to learn you first steps so too speak.

Even if yoou had a titanium uni, hand polished out of a single block, with gold plated rim and supr-duper-tire etc. you’ll pretty soon start buying another one.
You can never have too much unis.

I expect that you want to change the seat as soon as you start really putting weight on it.

Yeah…about that…can I pretty much use any comfortable seat? I don’t plan on doing anything fancy…just riding to and from busking…Can I slap on anything that happens to fit, or is a special ‘unicycle seat’ important?

Oh…I should point out that buying things is not really an option.

I can only work with pre-existing bicycle parts, and things I can build myself.

It looks like it could be a decent uni for learning. The frame looks a lot like a Sun, if that’s the case the seat post clamp may be welded to it. Swapping the quick release (QR) for a standard binder bolt will help a lot. That style of QR is not the most secure. This upgrade could run you up to a dollar, so not a big investment.

As long as the wheel turns I don’t think I would worry about it being wobbly. A decent spoke wrench is a few dollars, and learning to true a wheel is a life long skill. So, if you’re inclined it’s not a bad wheel to learn with.

I wouldn’t plan on doing any hopping, and I would limit drops to a few inches.

The saddle looks like a version of a Miyata which would mean a new post if you wanted to try any of the saddles mentioned already. I wonder how it would be as a flattened saddle. Probably not something you want to get into now, but maybe later on.

You can get a better seat clamp from bike parts. I can’t tell from the pictures whether the seat clamp is welded onto the frame or separate from it; in either case, you can get either a new clamp, or a better pinch bolt. Those are standard bike parts.

The seat, if you want to replace it you’ll have to spend money. Bike seats won’t fit on your seat post, and they’re not comfortable for unicycling anyway. What we used to do, back before we had decent seats, was replace or augment the seat foam with a bicycle tube inside a pouch or sock. Remove the cover, drill a hole in the bottom of the seat, and situate a small inner tube with a little bit of air (very low pressure) in there. You can search here for “air saddle” for old threads on how to make them. They’re not as comfortable as a good seat but they’re better than a bad seat.

It is, as you’ve surmised, a low-quality uni, but for your purposes it’ll probably be fine for quite a while. You might want to put shorter cranks on it if you have a way to do that.

That looks reasonably similar to the Avenir I got 8 months ago. I have other unicycles now but still ride that one as much as any of them. It’s my first choice for working on freestyle-type skills like backward riding, very tight turns, idling, and one-footed riding because of the short cranks and smooth tire. From what the old-timers say, today’s “inferior unicycle” is a vast improvement on inferior unicycles of the past.

The Avenir has a non-quick-release seat clamp which works far better than the cheap QR clamp on another cheap uni I’ve got. The convenience factor is lost when you have to readjust the seat every time you drop it. I agree with jtrops. Put a bolt and a nut through so that you can actually tighten it.

Everyone hates on the seat. I wouldn’t try to ride a marathon on it but it’s fine for what it is. Ten thousand hard drops onto pavement haven’t hurt it a bit.

Be sure to check the tightness of the pedals and the crank bolts regularly. Continuing to ride after one of those has loosened causes a lot of the failures that lead people to say it’s worthless junk.

That looks reasonably similar to the Avenir I got 8 months ago. I have other unicycles now but still ride that one as much as any of them. It’s my first choice for working on freestyle-type skills like backward riding, very tight turns, idling, and one-footed riding

Yeah, my learner uni was great for working on those skills. Wish I hadn’t sold it when I upgraded!

The one shown above won’t be ideal for 1-footed idling or 1-footed riding because it doesn’t have a flat-crown fork to rest your foot on, but that’s not an immediate concern. You should definitely be able to keep riding and learning on it for many months or maybe longer, especially if you don’t hop or ride down the stairs. Your quick release probably is welded on, and I don’t know your location, but if you have access to an area where there are large numbers of discarded/abandoned bicycle carcasses, look for a bolt and lever with no rubber parts.

It looks like what you have is a “good” entry level unicycle (at a very reasonable price!). In the late 80s/early 90s a unicycle like that would be a fabulous buy for around $50, except such good seats did not exist yet, except on the expensive Miyatas.

In regard to quick-release clamps, there are two types. One can close tight enough to work, and the other can’t. This has a lot to do with your post material. If it’s chrome, it takes a much tighter clamp to keep it from twisting. If it’s a knurled seatpost, that clamp may work. QR clamps must be tightened by twisting the small end before you close the lever. Properly adjusted, most QR clamps can be pretty tight, but not quite as tight as a decent non-QR clamp. If you can’t get it to work, go to a bike shop that sells BMX stuff and they can help you find one that fits. Best type would be one with two bolts if you can find one.

Inexpensive unicycles like that one have machine-built wheels, which often aren’t tightened up very well. Tightening the spokes may help it a lot, though it takes practice to learn to get a wheel really true. Unicycle wheels don’t need to be really true though, especially on learner cycles. Make 'em reasonably tight, and that should be enough.

Thanks for your replies, everyone.

I’ll admit there was about a week there that I considered not bothering to keep trying, as I am perfect and transcend all learning curves, so I simply assumed my uni was the problem and not worth trying to learn to ride. But what i’ve seen here has given me enough confidence in the thing to keep at er.

I “fixed” my QR clamp by tightening the bolt as absolutely tight as possible, to the point that I started stripping it, and then bashed the handle in with a hammer. That sucker is never moving again. Ever.

Thanks for your replies, everyone.

I’ll admit there was about a week there that I considered not bothering to keep trying, as I am perfect and transcend all learning curves, so I simply assumed my uni was the problem and not worth trying to learn to ride. But what i’ve seen here has given me enough confidence in the thing to keep at er.

I “fixed” my QR clamp by tightening the bolt as absolutely tight as possible, to the point that I started stripping it, and then bashed the handle in with a hammer. That sucker is never moving again. Ever.

Thing is, when you fall off and the unicycle hits the ground, the impact could twist the seat, in which case, you may regret ‘fixing’ it with a hammer.

And of course, beginners tend to set the seat low for the first few days, then increase the height as they progress- again, a seat clamp the can be untightened is essential.

If you can actually loosen it in the future, I’d suggest just learning to tighten it properly (as previously mentioned, it’s important to ‘set’ it by moving the small bolt before you tighten it with the lever) and refrain from the hammer.

Firstly …Welcome to the forum Baung

Secondly. You recieved the unicycle as as gift. Am I guessing chrimbo?
In which case you can ride 17 sidewalk squares after only two weeks in the saddle… Crikey Charlie !
Way to Go !

i have the same saddle on my learner-Uni (now my girlfriends) as replacement for the original “Thing” it had. So you already have something considerably comfortable to sit on.

I actually found a comfortable seat height pretty quickly. I’m reasonably sure that I’m not going to want it moving much more.

As for the unicycle falling and causing the seat to twist, that was the original problem, but has been solved by tightening the lock.

Also, my new distance record is ~75 meters. At least 50 of those are consistent, and the last few are a struggle to stay up.

Making good progress, and I’m glad I didn’t rage quit. Can’t wait until I can actually use it as reliable transportation!

I initially found the seat to be painfully uncomfortable, but that has passed.