wouldnt it be nice to have our own category in Strava, then we could follow other unicycle riders and such, and not be categorized with the mountain bikers and be 472 out of 472 on the same trails!!!

Just a thought, I sent my request in to Strava-
Doug

I used to use Strava too, it was pretty fun to beat some bikers (on things where uni’s always do, such as tagged hillclimbs) But round here there’s hardly any bikers either… So even without a ‘uni’ category I’m fairly lonely

Another thing that stopped me is that it seemed to have a big black-spot right round my house, so the mileage was always off, did the same with two different phones. I passed it off as thinking it might be to protect privacy, but still weird…

Anyway, just put on your Strava profile in your equipment what you’re riding, then if anyone clicks you they’ll see why you’re bottom of the list

See this thread If you are on Strava...
I prefer to be with bikes than being alone. And I’m happy if I’m not the last one

There’s already a thread in the STRAVA forums that is hotly debating how to separate MTN and road bikes. Then splinter groups chimed in arguing that they need cruiser categories, 26 v 29 mtn bikes, fat tires, etc. While everyone is debating STRAVA developers have done nothing to accomodate even the more reasonable requests.

I don’t see STRAVA doing anything for unicycles anytime in my lifetime.

I use STRAVA to track my mileage, speed and segments that I frequent. I set myself apart from all others by adding “(unicycle)” at the end of my name. This way I don’t feel bad at all if I’m dead last in a segment… in fact I feel rather good when I’m NOT dead last.

If you want to meet other unicyclists on STRAVA let’s start with this thread… We can use this forum to identify STRAVA riders and ride as a “group”. I’m DAVE TURPIN (UNICYCLE)… send me a friend request and let’s ride virtually.

Since there is only 1 unicyclist in my area that has expressed any interest in getting out and riding, STRAVA is my hook to other uni riders. Right now the list of uni friends is short but I would like that to grow.

For rides you can setup which uni you ride which is OK. Lately I’ve been adding 36x150 (wheelsize x cranklength) to the title to identify what config my uni is for that particular ride.

There is an Uni club on Strava:


Join and enjoy your ride

The headphones thread got a lot of posts complaining about how dangerous it was to use headphones while riding so I’d be remiss if I didn’t get in a good shot about strava in the strava thread.

IMO it’s not safe. It encourages unsafe riding to be some mythical KotM.

I am the strava curmudgeon, no worries, carry on.

The negative press regarding STRAVA KOM is more aligned with cyclists trying to be the top dog. And in the process taking unnecessary risks.

As a back of the pack unicyclist I’m not even close to making KOM unless I invent my own segment, which I have done… It allows me to track my road speed on my 36er in my neighborhood, which includes turn arounds in cul-de-sacs… It’s much easier to maintain higher average speeds on straight stretches of road.

For me STRAVA runs on my iphone, provides speed and elevation charts, personal PRs, links me with my 2-wheeled friends when they ride with me and in general, saves me from yearning to go out and pick up a Garmin 200 bike computer.

Since I still have not ridden with another local unicylist in Charlotte, it also helps me to connect with other uni riders outside of my geography.

as things stand, you have to choose whether unicycling is running, or cycling.
personally i prefer the smaller distance goals and breakdowns with the running.setup.

with records for 1 mile, 5 miles, 10k 1/2 marathon, full marathon etc.
this sits better with the rides i can manage, rather than the 40k, 100k that the cycling setup has.

there may be a way to change this so i can move back to cycling, but i log most of my rides as runs

There’s already a thread in the STRAVA forums that is hotly debating how to separate MTN and road bikes. Then splinter groups chimed in arguing that they need cruiser categories, 26 v 29 mtn bikes, fat tires, etc.

Indeed. And in each of those categories there are millions more people than us. Strava costs how much? Sounds like we’re getting a killer deal even if they ignore us.

If you want to meet other unicyclists on STRAVA let’s start with this thread… We can use this forum to identify STRAVA riders and ride as a “group”. I’m DAVE TURPIN (UNICYCLE)

I’m probably going to sign up soon. I’ll probably be Uni-Cyclone if they allow that as a name. And I might add (unicycle) if others are doing it.

There is an Uni club on Strava:
http://www.strava.com/clubs/uni-muni-mono-guni-unicycle-unicycling

Very cool. Thanks for pointing that out–I might never have noticed it!

IMO it’s not safe. It encourages unsafe riding to be some mythical KotM.

I recently read an article about that, where downhillers were doing insane stuff to beat the times of others. One of the examples given was on a road in Oakland/Berkeley that tholob and the other locals there probably ride on. He died, but only because he chose to go so fast he had to go on the wrong side of the road to make the turn, and had a head-on with something much heavier than he was.

Even if we connect with the other unicyclists on Strava, until we are training on the same segments, there won’t be much to compare. Beyond that, it’s up to us to decide to be stupid or not.

as things stand, you have to choose whether unicycling is running, or cycling.
personally i prefer the smaller distance goals and breakdowns with the running.setup.

My wife and I are Road cyclists, so I’m sure we will use cycling. She has already been using MapMyRide (I think), which does similar things with local segments. But Strava seems to have a much bigger user community so it should be interesting.

Just to clarify… people striving for KOM put themselves at risk but they also put others that are sharing the trails at risk.

I do my absolute best to share the trail, going to the far edge and, if necessary, even hopping off the trail to allow bikers to go by. That said I’ve been completely blown off the trail by bikers that were obviously going for a KOM. It’s not cool when it fosters the attitude that it’s ok to run a kid over because you’re really close to the KOM and you’ll shave off a half second by going through as opposed to around.

I can definitely see the positive side with tracking personal progress and ride stats. I’m just saying that some guys out there get a bit too competitive for their own, and others good.

I agree with the KOM thing because I ride Mountain Bikes also, but we ride these thru the week and at night rides,
The thread was more to keep us as Unicycles United to see where we compare or how we are doing in our own segments of the world. I would like to know how I am doing and it does push me to do better-

I joined the current Group but it already is mixing my mountain bike rides into the que.

As I said earlier, I don’t think I’ve ever met a real ‘stravass’. I think the few people that have jetted past me at top-speed were just fast riders… Getting a KOM on the nature trail I ride would be a bit boring!

It’s mostly just a smooth tarmac path from one big city to a dozen small towns, so usually the people there are just commuters, not fun-riders. There are loads of hardcore off-road parts forking off it, maybe I’ll go down there in the summer and see if I can find anyone going mental with Strava!

I think you’ll probably find people riding dangerously will ride dangerously no matter what… hell, I used to ride my mountain bike dangerously in my teenage years, just because I was a wannabe thrill-seeker and loved coming home top-to-toe in crap. Strava is a great, convenient way to track your progress, and you can’t really blame it for people being maniacs - People were maniacs 20 years ago too

Thanks to all the discussion on here about Strava I’ve got myself “App’ed” up and joined the club. I don’t have a clue what a KOM is but for me to track my own progress (from a distance per ride perspective) this looks like a great way to do it…especially as I have my iPhone in my pocket when I’m riding anyway. In the exceedingly unlikely situation that another local unicyclist appears on the scene hopefully it’ll give 'em a nice catalogue of local rides to go and try too

UL
Cheers vookash for the link…

KOM = King of the Mountain

aka, stud, bad ass, lone rider on the segment

I’ll summarise the comments I made on the last thread:

Don’t see the point of a separate uni category - would rather be 80th out of 90 (as is typical) rather than 1 out of 1. Have lost my uni KOM to a bike now though (which is really frustrating as it’s not out of reach, but is too far away to go back for another go until we’re on holiday there next year).

The idiots chasing Strava KOMs would be idiots if they were just riding. I don’t have any off-road KOMs, but if I tried for one I’d give way to other trail users when doing so (as I do when navigation racing off-road). Have a few on-road KOMs, but I don’t suppose anybody is worried about me going as fast as possible on those (well apart from the one where I average 35+mph in a 30 limit maybe, but that’s nit-picking (and willy-waving

Good idea for the (unicycle) bit on your name - I’ll use that for my second Strava ID and transfer over the uni rides so I can get on with chasing KOMs on the other account!

I wasn’t able to read the rest of your post because I was automatically drawn to this term. Does it mean what I think it means? If it does, I think it might be my new favorite innuendo.

is easy to change your name in strava:

“John doe UNI/MUNI/ Unicycle or whatever”

this will change your name to reflect across all rides showing you are John Doe UNIcycle.

you do not have to open a new account to do this. 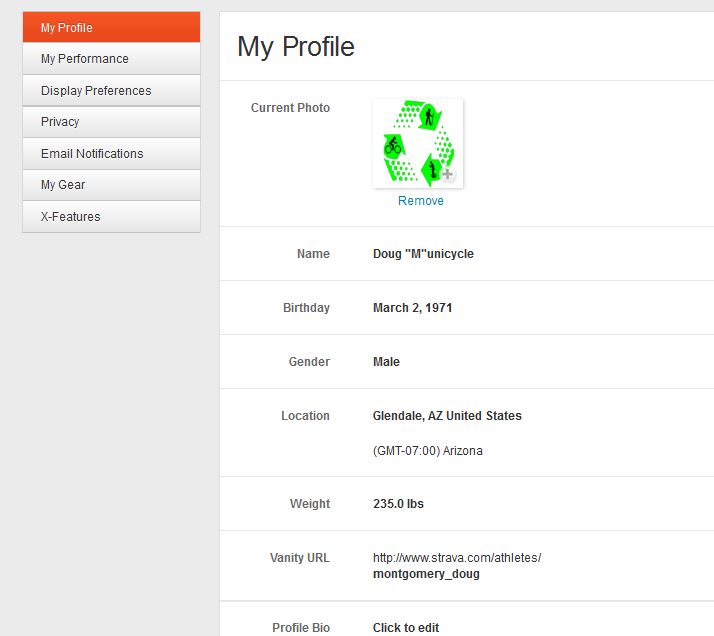 I wasn’t able to read the rest of your post because I was automatically drawn to this term. Does it mean what I think it means? If it does, I think it might be my new favorite innuendo.