Continuing the discussion from Folding / take down / traveling wheels:

Around 2018 I got excited about the idea of DIY fiber spokes but never built anything. It looks like the fine folks at Tarty Bikes with help for the MTBR forum members have worked out enough of the kinks that anyone with a basic shop should be able to replicate their process and have great results.

I really think this could be pretty great on custom big-wheels with odd/long spoke sizes, ultra-light 36ers with carbon rims, or even for takedown wheels (though I’m a bit skeptical on that one) 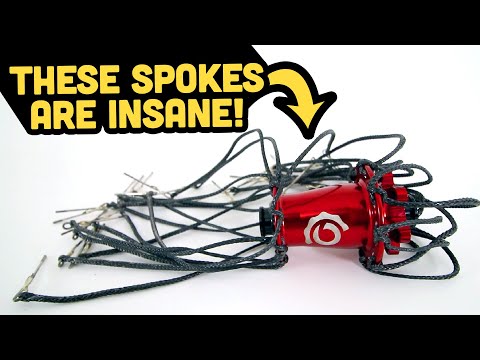 Here is Ali C’s assessment of his DIY cord spoke wheel – given he is a bike trials rider and he has these on this front wheel – he is doing things on the front wheel which stresses it a bit, so it is kind of as applicable as it gets to a unicycle on a bike… 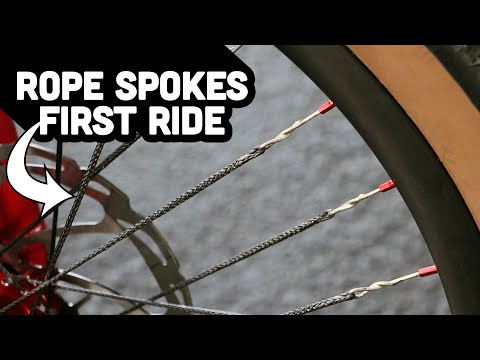 – he is doing things on the front wheel which stresses it a bit, so it is kind of as applicable as it gets to a unicycle on a bike…

Thanks for sharing this video. It is demonstrating some torsional use cases and braking. It still misses the compression case of a major vertical drop to round up uni abuse but at least it looks promising.

The only uncertain point is his mention of tensioning adjustments every few days at first (how much every time? And how often compared to a new regular wheel?) and he ends the video with alluding to a retensioning (either just a check or a real need?).

We have specs and proof-of-concept. Now we are just missing one last uni prototype to draw the conclusion if the benefits outweigh the constraints or not

Someday I’ll reuse my broken Berd spokes. But dunno when.

I haven’t had to touch any of the three regular wheels I have built up(two for unis one for b*ke) since I finished building them, so in my experience at least a regular wheel is done being built when you are done stress relieving it and you shouldn’t have to work on it unless you knock it out of tru or somehow mess it up.

The main issue is not a tensioning problem: the main issue is choosing the right lenght to be able to reach the nipples while elongating the first time and not to fall too long and the final setup. That is why one could opt for 16mm nipples at first step, than swap to dual headed nipples, than swap to 12mm nipples in the end.
I’m studing hard for the project

Well guys I’m starting to fell in the rabbit’s hole… I think I got it and the answer is very much easier than the video of the DIY fiber spokes. Give me time to test and get back with a success from the shame of the Berd spokes I paid and never ride.

I look forward to seeing what you come up with.

I feel like we could get away with using the J bend of a spoke + a washer to hold the end of cord at the rim rather than using a soldered loop. I do like they way they attached the cord to the flange.

That does feel a little like it might be straying from DIY if you need a spoke rolling machine, but I guess you can probably just buy those end spokes.
Does anyone know how small a spoke UDC can roll threads onto?

That’s fair. I bought a used Hozan rolling machine years ago for $150 and it’s been pretty handy. I haven’t used in it a few years but I bet you could make a pretty short spoke with it if you modified the spoke holder, or just used the roller head in a drill and held the spoke in a vice.

Granted it’s not a tool everyone has but I wouldn’t consider it out or reach for other tinkerers.

Likewise you might be able to get local bike shops to shorten spokes if they have a thread rolling machine.

Darn it, now I want a spoke rolling machine.
It would probably take 10 years for it to pay for itself, but I do like owning tools…

My local bike shop could probably do it, but I doubt it would be cheaper than UDC UK, nor faster or less effort for me.

Darn it, now I want a spoke rolling machine.
It would probably take 10 years for it to pay for itself, but I do like owning tools…

A kindred spirit-- been there – and stepped back from the edge that time! However this reawakened that “need”… it would never pay for itself but having the tool and the capability to just do stuff when you need to is just so nice

I think it was Cyclo or Weldtite stuff I looked at.

Well so far I’ve had two sets of spokes from UDC custom cut this year, with at least two more in the pipeline. Ignoring shipping costs from UDC (which unless I can find another source of spokes I’d be paying anyway), it seems I’d need another 46 or so to break even on a spoke roller.

Another 46 sets of spokes?

The tools aren’t all that bad as cycle tools go, eg:

So you’d be looking at around 95GBP for the tool and one head, with about 30GBP for another pitch head. So if UDC are just charging ~2GBP to cut and thread a set of spokes that is pretty good value. Maybe I’ve got something wrong though.

I’d also need to purchase something suitable for chopping spokes to length.

Anyway, we’re getting a little off topic!

Gotta be patient and see what @Vogelfrei80 comes up with

Well I did disassembled mine, but I cannot speak about how they are made. However… taking a close look to the mtbr thread seems that a guy posted pictures about the easiest and straight idea: cut the spoke, spalsh it in a glue, put it inside the cord… one can never understand how strong are glues nowadays

So no rethrading spokes at all

I thought the issue with gluing spokes in is that the cord ends up shearing where the spoke ends where there’s a sharp edge.

But isn’t this, what Berd does?

I would have thought you can always round off the sharp edge by rotating it on a grinder, you can always hold the bit of spoke in a pin-chuck and spin it against the abrasive wheel with your fingers. Like Vogelfrei80 I am amazed at the strength of the adhesives.

The adhesives wouldn’t need to do all that much as the rope forms a chinese finger trap over the spoke that should do most of the holding.

One issue is that gluing onto the j-bend end means that you’d have to enlarge the hub spoke holes to get the spoke plus rope thickness through.