Which is the best saddle to put on a giraffe? I think you’d need a pretty strong durable saddle on a giraffe because the forces involved in dropping the giraffe are greater than on a standard uni. Has anyone used the KH and viscount and Miyata saddles on their giraffe for comparison’s sake? I’m inclined to think the Viscount may be the most durable (once the bumpers have been fixed) but not the most comfortable.

Also is a handle an advantage at all? Is it useful for seat out back riding? [KH saddle vs KH freestyle saddle]

I had a ride on an old DM 5 foot giraffe last night and boy it had an uncomfortable saddle! It was an older model than this one

you might want to upgrade the bumpers to make it more durable.

I have a Torker Black saddle on mine, which is just like a miyata. It’s comfortable enough to ride long distances (parades and such), which I think is important. I think KH saddles would be overkill. They belong on more versatile unis.

the strength isn’t as important as it sounds. Whenever I dismount or UPD, I catch the saddle anyway. I think a viscount, or united is just fine for a giraffe.

Hmmmm, seeing as I have all the seats mentioned above (except a KH freestyle) I’ll just do some experimenting and see what works best.

In honor of not starting a new thread on a topic that has been previously discussed, I figured I’d revive this gem.

I’m new to giraffe riding and working on getting comfortable and learning to free mount it. So far, my free mount attempts have been unsuccessful, but I’m determined to get it. Riding it is a lot of fun and I was riding forwards and backwards today. Idling has been a little tough because I’m still getting a feel for the unicycle’s reaction time.

Anyway, as I ride the giraffe, the stock saddle feels like it is high in the back and it feels awkward to sit on - almost like its throwing off my center of gravity slightly. I’m planning to put my KH freestyle on to see if it makes a difference.

My question for other giraffe riders is what saddle do you prefer?

you sure it’s not just the angle of the saddle that’s bothering you? I really don’t think there’s a difference in saddle choice between a giraffe and any other wheel. Street or Trials may require something different. (thin/light) For Muni you may want something thicker like a freeride, but whatever works on your typical cruiser cycle will work on a giraffe.

Wookie, you forgot to tell us what kind of saddle you started with. Brand/model?

My Giraffe has always had a good old (snort) Schwinn saddle on it. Back in the days of learning and beating it up a lot, this meant a lot of duct tape and torn covers. Later on, it was relegated to specific activities, which included not being ridden that much, which means saddles lasted a lot longer.

With the advent of Semcycle, and their taking over the tooling and production of the old Schwinn seats (around 1986), there was access to a choice of colors, and plentiful replacement covers. I covered my old black Schwinn cover with a Semcycle white one. In other words, double covers. That has held up for many, many years since; tons of shows but not a lot of other riding.

For today, I’d say don’t spend a lot on a giraffe seat unless you’re really spending a lot of time up there. Then go for comfort (personal choice). If you’re dropping it a lot, go for strength. If Viscounts are still on the market, their metal bases probably hold up very well, though the bumpers don’t. But also any high-end seat with bumpers will probably be fine, unless it’s on a tall giraffe, 8’ or taller, that really hits hard when it lands.

In answer to Tony Melton’s question from 12 years ago, yes to the handle. If you’re doing tricks it might get in the way for some, but if you’re riding over bumps (like in a parade) you’re really going to appreciate having it!

My giraffe is a Torker Unistar TX and I’d estimate it at 7 years old. The saddle is a Torker saddle and appears to be the stock saddle it came with, which does include a handle.

Any other thoughts and/or preferences on giraffe saddles?

I would not take the Viscount. All giraffes of our club had Viscount saddles. But we’re not very happy with them. When they need new saddles we raplace them with something other.

The metal base is really durable and you can bend it in the shape you want. In some generations, they losse their bumpers very very fast. We had a hard time fixing all these bumpers with thicker bolts and glue. The worst thing is sitting comfort. When we practice for shows it’s allways painfull. It’snearly impossible to sit on them for more than 5 or 10 minutes without pain. (That said, I can sit on my other saddles for hours without any pain)

We now use an older model of Cionlli Saddles on our giraffes. They have also a metal base and no bumpers. They’re way more comfortable but still not perfect. (The new Cionlli saddles are totally different).

On my 20" Freestyle uni I ride the Qu-Ax Muni/Trial/Street and it’s really good. I allways thought about using this for giraffe but haven’t testet this yet. 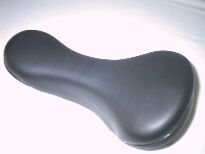 Oh yeah, now I remember. Nix the Viscount, unless you only plan to ride for 5-10 minutes at a time. That means no parades!

I have the Nimbus performer Giraffe which came with the Nimbus gel saddle.

I swapped it for the KH Street as I found it less obstructive for fremounting and more comfortable for ‘distance’.

That siad, the maximum distance I have covered in one go is 6 miles (9.6 Km) but then, I am a pensioner (that’s my excuse for everything!)

Thanks for everyone’s suggestions! I switched out saddles on my giraffe and it made a big impact. I had much better control and successfully switch between riding forwards and backwards and idling.