I’ve read a number of posts on the subject of using a 29" tube in a coker and as no one actually to have reported on actually doing it, I though that I’d give it a go myself - out of curiosity as much as anything so I got myself a 700x35-47 Hutchinson Buutyl inner tube and popped it into the coker - it took a bit of fiddling to get the tyre on but this was accomplished with out any pinch flats. I then inflated the tyre to a bit less than 40 psi and then there was a loud woosh from the tube and all the air decided it was time to leave - on removing the tube I would about a 24" rip in it it where it had catastrophically failed. Looking at the rip it pretty much runs down the middle of the tube so not on any seems but at one poitn does seem to touch the fold line of the tube where it was packed and the rubber there does show some signs of perishing so possibly that was the cause of the flat.

So, the question is this, has any one actually tried it? and if so which inner tube did you use? I was wondering whether it might be better to use a latex tube as they’re stretchier. I’m really keen to try this out as the change of tube is going to save in the region of 400grams of roatating weight which would be a most splendid thing however its probably not worth the effort if it isn’t going to be fairly reliable. So if anyone as any thoughts post them as I’d be interested to here about others experience. Am off to the bike shop now to see if they have any other likely candidates onthe tube front

According to this thread, Tony has tried it and it worked.

Tony Melton has tried it, raced it, and as far as I know, not had any problems with it.

I think it should work with a regular big 700C tube, but a 29" tube might just give a bit more rubber contact.

I still would recommend a tubeless conversion over using a 29"/700C inner tube though. More expensive, but it rides nicer and there is no chance of pinch flats, and also there’s gloop to seal up small holes.

According to this thread, Tony has tried it and it worked.

Thanks Ken for the recommendation on the tubeless conversion I’d read your posts on doing this and thought that it perhaps sounded a bit of a complex operationbut I might have more of a look into it although I don’t really understand how it works and keeps the air in - time for a bit of research - you don’t know what brand of tube Tony Melton is using do you? as I said before, the failure of the hutchinson tube that I had was fairly catastrophic jusdt about the time that it reached a suitable pressure but perhaps I was just unlucky

The tubeless conversion is not that complicated- I just measured the circumference of the Coker rim with a piece of string, emailed Stan who made me the rim strip. Stan might still have those measurements. Anway, he sent me all the stuff needed to put it together (rim strip, gloop and instructions), except I was too lazy to do that so I got my local bike shop to do it. They didn’t have any problems- said it was straightforward as any other Stans Conversion

Tony checks RSU quite frequently, so probably expect him to reply early in the week.

I have been riding Coker with 700c WTB tube for 6 months. No problems to date. It made my wheel noticeably lighter. The weight reduction was most evident when accelerating and decelerating, but I even felt a ‘swing weight’ reduction when turning sharply. My Coker became more responsive. I recommend it.

Installing the lighter tube began, for me, a bit explosively. When I finally got it all back together and pumped it up to 50-60psi – BANG! After inspection I realized that I had pushed the rim strip aside and exposed sharp surface nipples that popped the tube upon inflation.

I tried again, beginning the process by taping the rim strip in place with a single wrap of electrical tape. I overinflated the tube alone and stretched it a bit. Deflated it again and squished it in from the side. Finished installing the tire, inflated it, and began riding. It has been sweet ever since.

(I also think tubeless would be great, both reducing weight and increasing performance, though I haven’t tried it.)

My Coker with 29" inner tube is still going strong - no problems yet. I used either a WTB 29" inner or a Quality Bike Parts one. I needed a washer to adapt the valve hole from schrader to presta (standard schrader to presta valve adapters were too small for the hole.) A good quality rim tape helps. I don’t know what rim strip standard Cokers come with, but it its a free rubber strip replace it with some wide rim tape (the stick-in-place type).

Cheers for all the encouragement - I’m thinking that possibly my “explosion” may have been caused by getting som grit in between the tyre and the tub when I put the tyre in - so I’m going to get another tube and try the 700c route again. Might then have a look at the tubeless approach but the 700c tube version needs to be conquered first. I’ll let you know how it pans out - I’m prepared to perevere for that weight saving

Here is a helpful writeup about how to do the swap

Here is a helpful writeup about how to do the swap 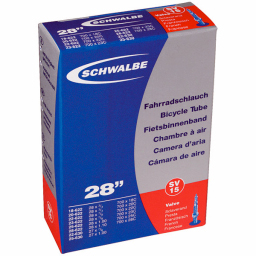 I did this without powder as the need for powder on bicyles is reportedly an urban legend http://sheldonbrown.com/brandt/talcum.html

I used a Sunlite Schrader Tube - 29 x 2.1 that was on sale at REI earlier this month for $4.75 and all went smoothly…Took all of about 10 minutes to do the whole job.

I did this without powder as the need for powder on bicyles is reportedly an urban legend http://sheldonbrown.com/brandt/talcum.html

Jobst is a very bright guy but I’ve seen inner tubes fused onto the inside of bicycle tires with my own eyes and peeled the pieces away with my own fingers. My experience trumps his theory. I use powder.

Jobst is a very bright guy but I’ve seen inner tubes fused onto the inside of bicycle tires with my own eyes and peeled the pieces away with my own fingers. My experience trumps his theory. I use powder.

A zombie thread is unleashed after so many years of peaceful rest six feet under the surface of the forum. It must be Halloween!

I normally wouldn’t reply on a thread revival like this since it has been done, and discussed plenty in the time since the OP. That being said, I find the new turn on the “talcum powder” vein interesting.

I don’t think Jobst is saying the tube won’t stick to the tire. In fact he contends that this effect makes the tubes less likely to release air when they are breached. What he says is that when cars and trucks used tubes they had problems with the tubes becoming fused to the tire in such a way that removing the tube would destroy it. While I agree with his general premise there are notable exceptions, and reasons that I keep a bottle of talc in my shop.

A zombie thread is unleashed after so many years of peaceful rest six feet under the surface of the forum. It must be Halloween!

yojamey started it. It wasn’t me!

I don’t think Jobst is saying the tube won’t stick to the tire.

There are probably other good uses, but at the moment I can’t think of any. I’ve never felt the need to talc the entire tube/tire interface. To me that is unnecessary.

Powder is quite cheap where I get it. And it could be because of the conditions around here, with bikes (and unicycles) stored in sheds and garages where temperatures are quite high every day all summer for years, but my experience contradicts his premise. I just wanted to mention that.

Is there a reason to choose the Foss tube over a butyl rubber 29" tube?

They have cool valve stems and an even cooler name.

I’ve never tried a 29" tube on a 36", and haven’t compared weights. Does anyone know how they compare? I’m sure there is a range of weights for 29" tubes, and I’d probably want a “heavier” one if I were going to stretch it like that.

I have had one flat with my Foss tube. I think it was the result of a sharp object being shifted away from the tube, some time after making the puncture, that made it leak. The tube was otherwise in fine shape, and I have since purchased a set of patches (you need special ones for the Foss tubes).

I’ve used both the foss tube and stretched 29er tube. They both slowly loose air over time, both at about the same rate. Both weigh about the same. Foss tubes are slightly easier to set up but are finnaky to patch for some reason. It’s basically a wash which is better.

I have a Foss tube in my 36" and have used a stretched 29" tube at some point in the past. I agree with Eric that they both work, but the Foss valve stem does look more cool. On the other hand, the 29" tube is available locally for a small fraction of the price.