Smallest wheel size you use for distance riding/commuting?

I’d be interested too! Theoretically, it would be a 30" in high gear, but the small wheel won’t go over obstacles and imperfections as easily as most sizes above 20".

My setup has a very high seat (freestyle-height), and anything technical, like riding over obstacles, or doing drops, is performed with the seat in front. I’ve gotten pretty good, with a lot of practice, at keeping both hands on the seat during SIF, and this gives me a lot of leverage/torque to power over obstacles, and I’m able to drop my center of gravity going SIF over obstacles, which helps. So, it’s not momentum keeping me going over stuff, it’s the ability to pull really hard on the seat and produce great turning force, that’s going to work with the G20, particularly in high gear.

For sure, in mUni type situations, I’ll be dealing with pedal strikes quite a bit more, and I will probably be hopping over some obstacles that I’d have rolled on my 29er. Again, huge experiment, and I’ll keep you all posted.

Depends on how long your commute is, how much time you’re willing to take, & your other riding interests.

For almost 2 yrs I did most of my 2.4 mile commuting on a 20". It was a bit slow and bad @ rolling over bumps but I took that as a plus. Since UPD’s were less scarry than my 24 or 26, I could get WAY more aggressive as I was trying my “urban MUni”. Also since it took more revolutions of the wheel I’d effectively get more practice for the same distance. When I’d get back on my MUni I could confidently roll over bigger bumps than if I’d been commuting on a bigger wheel.

Welcome to the forum, mtu! I am wondering if the reason for your aching legs, after the 2-mile trip on the 20" unicycle, had to do with the lack of resistance pedaling, combined with a possibly higher cadence (pedal rpm). The result may have been that your legs were flopping around, which could have caused the pain.

I typically ride more than 2 miles on my 20", but the goal is not distance, but rather to fart around on different landscape, and I make a lot of stops along the way.

In a couple days, I’ll be in possession of a geared 20" unicycle. The Schlumpf has been installed in a Nimbus Equinox frame. The logic behind this setup is untested, but my thoughts are the following:

Hopefully, I will be posting some pictures and reviews of the new setup throughout the summer. It could turn out to be an epic fail, though I hope not

I did it just after I learned to ride a unicycle, and had the seat too low.

I was like “I’ve just learned to ride a unicycle - I’m going on a long ride”.

Recommended for long rides? Only if you’re trying to get attention, publicity, sympathy, or raise money for charity.

Thanks for the interesting question. I started unicycling about 12 years ago on a Sun 24-inch wheel and then always “graduated” to a 29er and then a 36er. About a year ago, though, I decided to get myself a Nimbus 20 with ISIS cranks and the special gel seat. I am loving it. Since I work from home, I’m able to ride a loop around my neighborhood (about 1 mile) a couple of times a day. The loop seems a little too short for the bigger wheeled unicycles. My hope is to get really good at idling on the 20 and then hopefully, the skill will transfer over to the 29er and maybe even the 36er. In the meantime, I’m enjoying the really tight turning radius and the easy free mounting. I won’t give up the bigger wheels, but the 20-inch sure is convenient.

(not a commuting or transportation ride)
Once I rode my 12" uni, which has a super-low seat, in a 1-mile parade. When you ride unicycles in a parade, usually you ride 2-3 times the distance of the parade route.

The picture below is much more recent, and not from a parade but it shows the unicycle I’m talking about. Yes, I was miss December in the Unicycle Magazine Calendar about 10 years back. 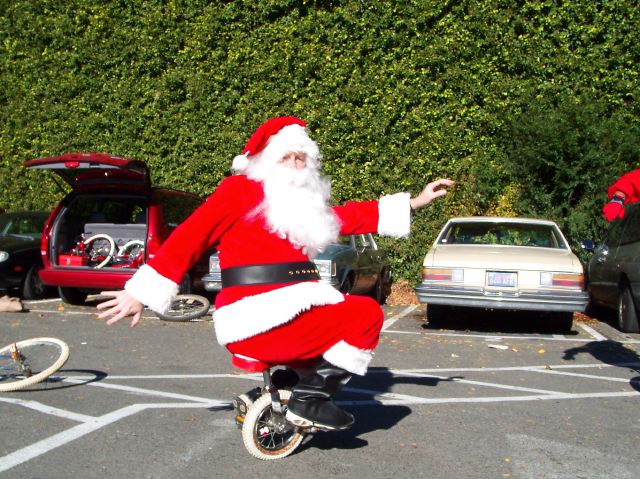