Question for those of us , uh, vertically challenge unicyclists

So I have a question for those of us who are, uh, vertically challenged.
I’m currently learning to ride on a “Club” Unicycle, 24 inch wheel.
I was setting some future goals for myself and thought I’d look into either a 26 inch or a 29 inch wheel once I became proficient. I went to Unicycle.com and found that 26 and 29 unicycles weren’t meant for my inseam ( I’m five three and have a 29 inch inseam ). The only other size I saw that would work was a 36 inch NightFox. So my question is this, is it possible to modify a unicycle to fit a lower inseam that what it’s recommended for , and if so, is it a good idea to do so. (BTW - yes, I have an eventual goal of getting a 36, but that’ after I get proficient with the '24 and whatever I pick for the next size up 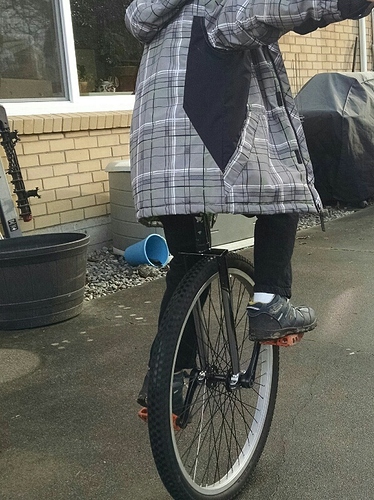 Hi Batou
I can’t give a useful answer about modifying frames as I’m still not brave enough to take a hacksaw to my 36".
But, have you thought about what shoes you wear to unicycle ? I wear 5/10 impacts and they magically make my legs an inch longer. Also, a flater seat can give a half inch or so.
When I was measuring up for my 36" I was trying alsorts of different ways to be able to reach the pedals. I have even tried chunky pedals, but that means I have to leap up higher to get on them.

Hope it works out.
I have sat on a Nightfox, and it feels nearer the ground than a Oracle. I should have waited for the Nightfox instead of rushing to get the Oracle

Hopefully some one else can confirm this.

I ride a nightfox with 137mm cranks with 5 inches to spare in the frame adjustment. and a 24 inch KH with a slightly cut seatpost.

At your size you can certainly cut down the seatpost and frame on essentially any uni (that’s not a 36) to make it work for you. Just remember that it’s hard to put something back after you cut it off, so cut less than you think you need to.

I recommend a tool like this one as opposed to a hacksaw. 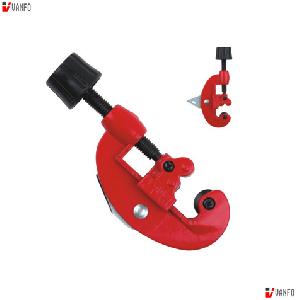 I recommend a tool like this one as opposed to a hacksaw.

Others on this forum have said that a pipe cutter can upset the tube adjacent to the cut causing the post diameter to become slightly enlarged, prevent it being able to be inserted into the seat tube.

This seems likely since the cutter forces the metal sideways out of the cut rather than removing it like a saw or cutoff wheel.

municycle.com (UDC Germany) offers frame cutting. Maybe you ask UDC to cut the frame for your inseam when you order it.

I have a 28" inseam and I ride a 20", 24", 26", and 29". I definitely have to cut the stock seat posts to an appropriate length, but I’ve never felt too short to ride anything, especially with different crank lengths and shoe width options. There’s a girl named Liz who lives in VA and I believe she is 5’0" or shorter, and she rides everything from a 20" trials uni to a 36" off-road nightfox.

I’d say if you’re going to get a 36" later and want something different sooner, get a 29". A 26" isn’t significantly different from a 24", but a 29" will show results and will probably help you transition to a 36" more easily in the long run.

Your inseam length should never limit you. Dream big.

I cut both my 36 and 29. I used these instructions and had no problem.

I used a hack saw, a file, and a drill to create a new slots. It didn’t take long. It isn’t pretty, but it works. You can’t see how poor my metal working skills are since the the clamp hides it.

I only too off an inch. I am thinking of snipping off more so my son can ride the 29.

I’ve never had an issue with the pipecutter, but I suppose that there might be some issue with increasing diameter slightly at the cut. Do you happen to recall if it was something beyond a file or the pipecutter’s attached scapper gadget?

You will need to file the end or you’ll have a hell of a time getting the post back in. I usually just slightly chamfer the end of the seat post with a bastard file.

I’ve done it on two different unis and never had any need to file at all. I wonder what the difference was. Maybe model of pipecutter, sharpness, brand of unicycle?

I can get mine it without filing, it’s just a PITA.

I appreciate all the responses I’ve recived.
Thank you !

I’ll likely check out municycle.com as I’m too chicken to cut either the seat post or the frame. So thank you all for your suggestions!

If you really want a 36er eventually anyways, that’ll be most likely the Nightfox given your height. So if you just want a smaller uni to get comfortable and then ditch it for the 36er–why not just by a Nightfox & a smaller wheel, e.g., a 26er? So you can use the Nightfox with the 26er at first (the looks aren’t really different from tall people using that frame with a 36er wheel!), and later switch back to the 36er wheel it came with… and you just have a 26er wheel to sell (or if by then you want to keep a 26er, you can still buy a second frame then…).