A group of us met for my 66th birthday ride yesterday along the Iron Horse Trail from Hyak to Olallie State Park. In attendance were Tom and Miles Blackwood, John Childs, Jeff Sloan, Melinda Mullins, and Zach and Greg Harper. Tom and I had the treat of both having our sons on the ride even though Zach rode a sissy-cycle. I, in fact, used Zach as the card to play to maintain the international status of the ride because he and his wife are currently moving from Beirut, Lebanon to Moscow, Russia. Melinda claims to have also bestowed international status on the ride by providing chocolate cupcakes produced in Canada.

An overcast day with but a small spot of precipitation made for a good, cool, downhill ride of 17 miles. Delicious Ding Dongs provided by the Blackwoods gave us a crucial energy source to counteract precious calories lost from the extreme exertion. Those were, however, trumped in quality by Melinda’s Canadian entry. Tom “tailgate-at-your-own-risk” Blackwood did NOT take anyone out in the tunnel this year but did manage to cause minor mayhem when his light extinguished and refused to re-ignite. I had a great deal of difficulty keeping up with Jeff and Melinda even though they were both on puny 29-inch wheels. Jeff allowed me to overtake him several times by repeatedly UPDing in front of me. I could only pass Melinda by verbally distracting her and causing her to lose focus. JC provided, as usual, every imaginable tool possibly required for a ride and, once again, having them proved the necessary deterrent to needing them. The Blackwoods maintained the lead throughout the ride cheating as they always do by drafting off one another. Zach was amused when he went back a short distance on the bike to pick up a pair of gloves I had left at one of our many stops and I asked him if he thought he could catch up with us again. Comradery and general shenanigans, as usual, were enjoyed by all.

Sounds like a good ride. Here is a link to an approximate map.

Jeff Sloan provided a photo of me with flat GILD. I have aged substantially since the first IHD ride in 2004 but flat GILD remains ageless. 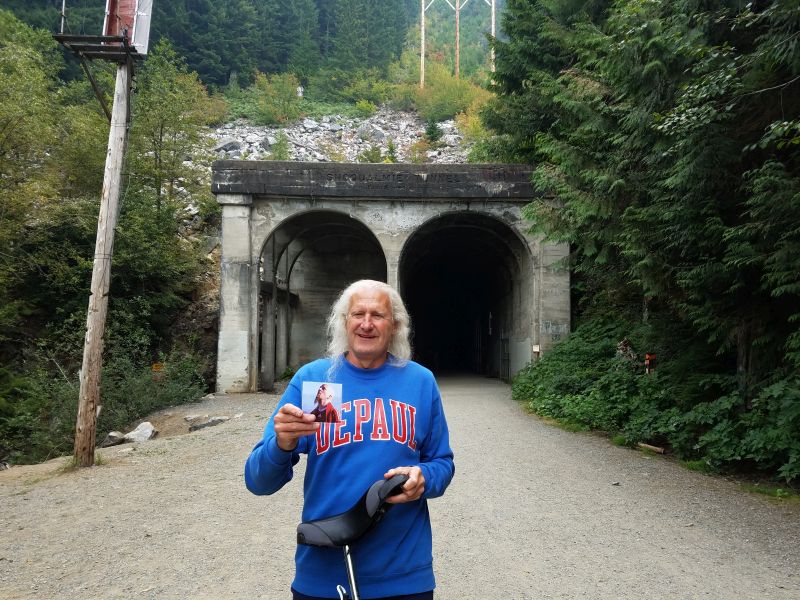 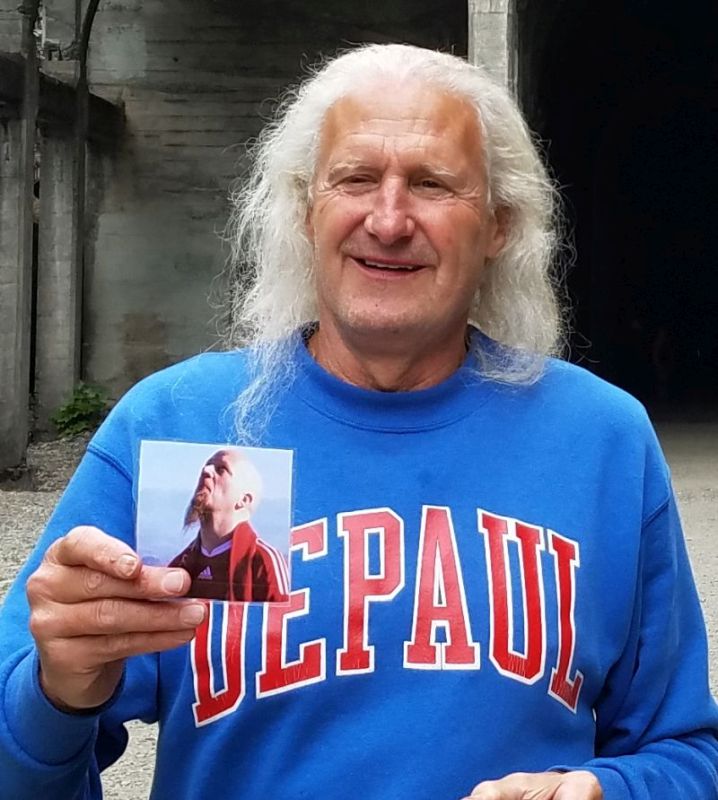 Hi Greg, Sounds like a great day to ride, is that a blue demon sweat shirt?

Hi Greg, Sounds like a great day to ride, is that a blue demon sweat shirt?

No. I got the sweatshirt at St. Vincent de Paul, not DePaul University.

Sorry I Missed Out

So Dawg: The pictures lie and don’t even come close to showing how “down” you are or give any sense of the “'mad skills” you gots, Yo!

Y’all chill leme lay it out: This is Harper…

He is riding a unicycle on a multi-million dollar “Particle Accelerator”…for shizzle!

Why?.. gots no idea, but you would dig him with like two shovels!

So check it out: Harper is riding his unicycle top dead center down a multi million dollar Particle Accelerator…Keep in mind that he is totally genking his uni over those ports so he doesn’t crest. Dude is really good at riding rails and skinnies…Once seen him so pitted thought for sure his line would collapse but he held it together by kicking back like a mule and somehow major arced out of the inertia and rolled it out and was like no UPD for ME!—GRAVITY!.. UPD is an “Unplanned Dis Mount” Unicyclist use that instead of “Crash” or “Bite It” case some yall aint familiar wid it.

We riding at Gas Works Park nother time and Harper was hitting these berms with only like 5 feet of roll-up…and these are not some minor mogul that could not hide a small dog because when you are all the way in…and I mean full on up against it…it looks like the friggin Berlin Wall…anyhow…so right at the base you just knew he was so far in the hole at the bottom that he could never top out, but next thang dude is launching off the peak of the curl with enough air to clear a Jeep…So then I’m thinking Harp is going to overshoot that and prolly going to go “STARFISH” in mid-air and wind up “YARDSALE” in the grass on the other side of the road, but he lands it like dropping a silk scarf. For sure a paradigm shift and I saw the line between what is possible and impossible get so thin it became invisible like imaginary hairs in a unicorn mane …and I’m like Whoa, that just got real…but Harper is chill as an Ice Monster …like an Abominable Sasquatch standing next to the flag in the middle of the North Pole with a popsicle… total fable…but it just went up like an air biscuit with gravy 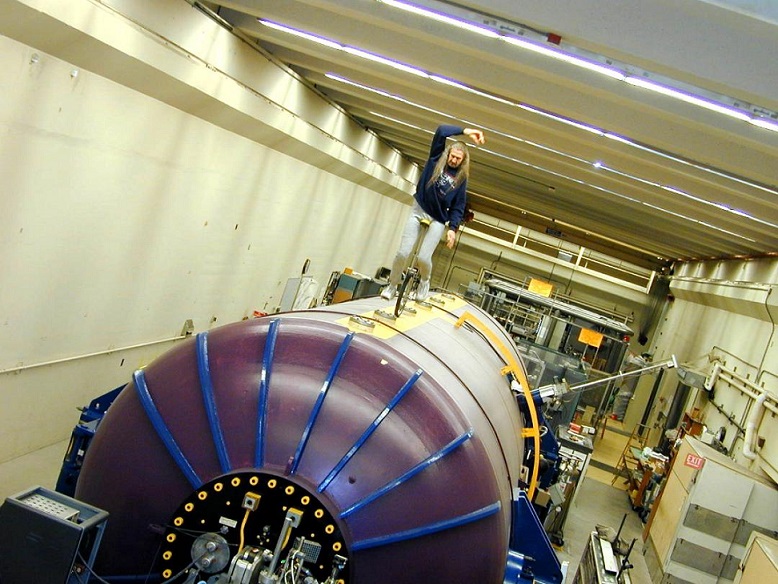 Here are some photos that Tom took. First is a shot at the tunnel entrance of the unicyclists only, L-R Tom, JC, Miles, Greg, Melinda, Jeff. Second shot is with Zach on the bike and Tom missing from the picture JC holding flat Doc, Miles holding flat “rider-formerly-known-as-Tom-Jackson,” me holding flat Irene, and Jeff holding flat somebody. Last photo is Zach and me riding across one of the trestle bridges. What a treat, doing that ride with my son. Thanks for the snaps, Tom. 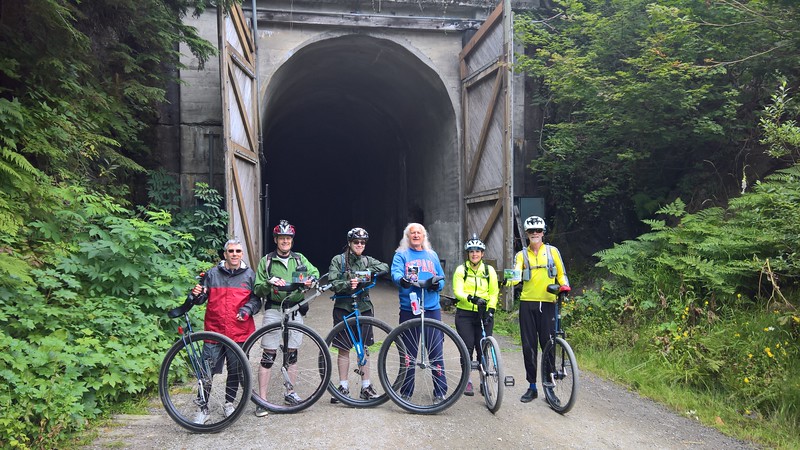 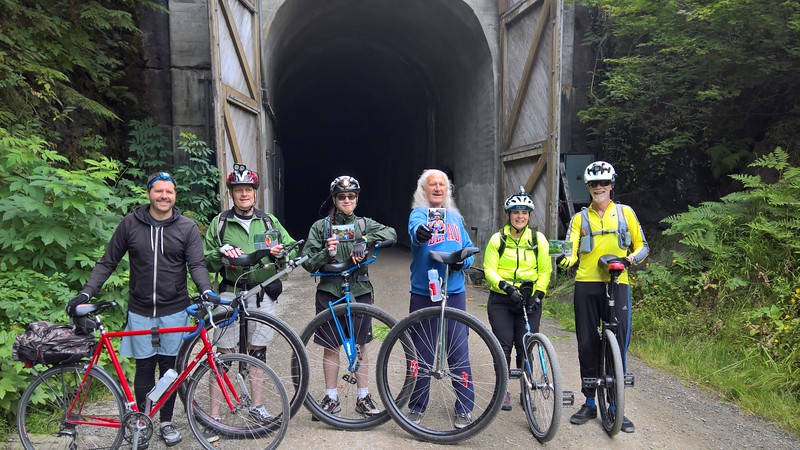 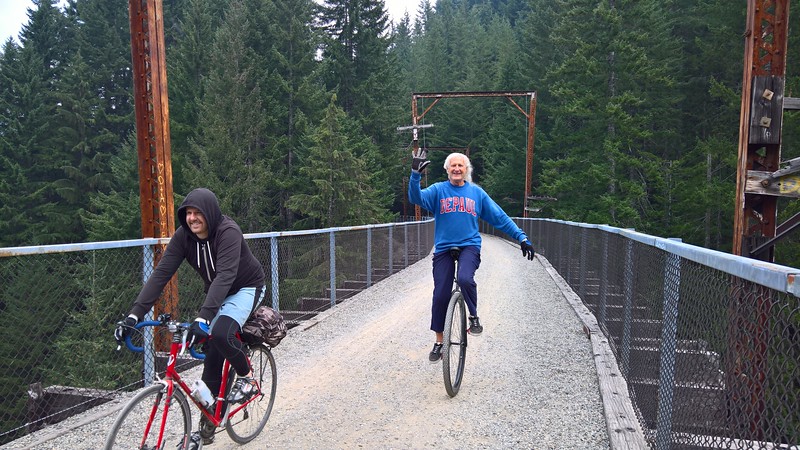 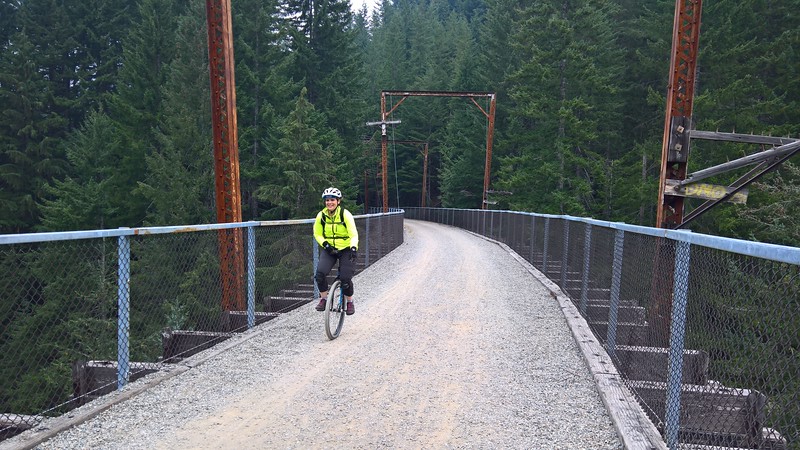 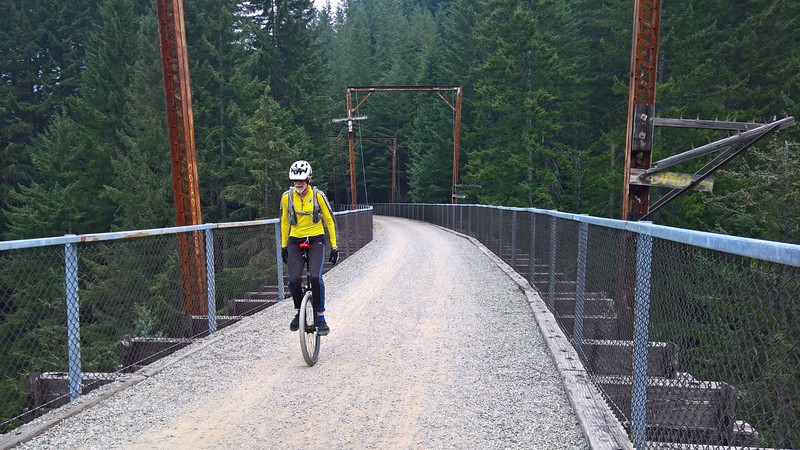 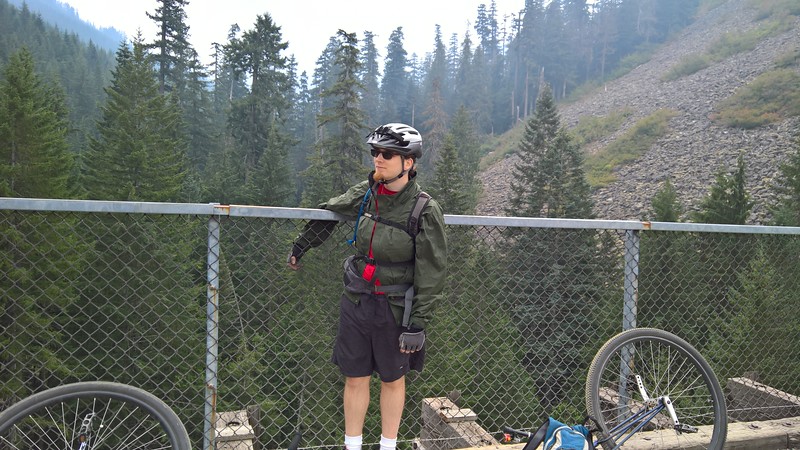 Wait a minute, you’re getting MORE hair as you get older? I thought that only worked for the nose and ears, maybe eyebrows if you’re a Taoist priest in a kung fu movie.

Looks like a fun chummy ride! Nice to be able to find others to uni with, as there sure aren’t a lot of people doing this.

I haven’t planned a ride this year. I just got back from a long motorcycle ride a couple of days ago. When I was gone, I didn’t know if I would be back in time to plan one. If you show up, however, it’s on, baby.

You got really old, dude.

But even freakier is that for no explainable reason - I haven’t been on this site for a while - this morning I was thinking of you during my commute to work. I couldn’t come up with your name but I kept picturing the t-shirt I still have.

I finally dredged up your name, farted contentedly in my car, and moved on to the important business of wondering if my new boss from Finland who is visiting the NJ office would have anything to say to me.

I carefully marked off a distance of 67 feet and rode my age today.