That is a Profile hub and crank set. Most of the early “heavy duty” unicycles used this hubset. It was the first popular splined hub used on a unicycle. The cranks need to be removed, and greased periodically to avoid creaking. This is actually really easy to do without special tools.

UDC called it the Profile Poznanter hub, after David Poznanter, a unicyclist who may have consulted with Profile on the project. He was also one of the first MUni people to use 3" tires (1999 or so).

Profile may have been the second splined hub you could buy on a unicycle, following the DM ATU from 1999. Anything before that (like George Peck’s stuff) was custom made.

Note to Sask: Even with the proper tools, I have a HELL of a time getting cranks on or off my Profile hub. If there’s a way to get them to not creak, I’ve either never figured it out, or maybe started too late and the damage is done. I’m still riding my Wilder with Profile hub (and 145mm cranks).

One thing I never understood was there was a “put a rail adaptor on your seat and use a bike seatpost craze” 10 or so years ago.

Not sure either, but here are the three alternate reasons I can think of:
[LIST=1]

I’m having a lot of fun cleaning this up so far and my girlfriend is helping me with the restoration. Here’s the frame as of two minutes ago. 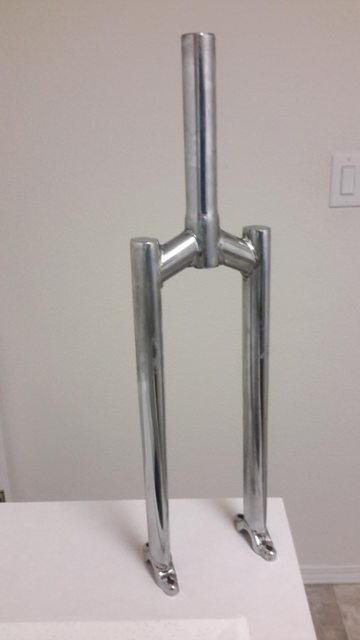 I’ve honestly been scrubbing most of the smaller parts and she just dove right in on the frame. She says it’s a “rough draft.” Gorgeous. And so is the unicycle.

Now as for those cranks, I have a modern crank puller (square and ISIS only) as well as a bearing puller kit (this one from Harbor Freight). Thoughts on the best way of getting em off? Or whether I should even try at this point? For what it’s worth they aren’t creaky at all.

Or whether I should even try at this point? For what it’s worth they aren’t creaky at all.

Do you have a reason that you want to? If it would just be taking them off to take them off that’s probably not a good idea.

Do you have a reason that you want to? If it would just be taking them off to take them off that’s probably not a good idea.

I guess just to strip things down to the bare nuts-and-bolts and get every last speck of rust off of it. But honestly, in the brief amount of time I putted around on this thing it felt totally solid. I’m leaning more towards “just shine up the outside with the wheel still intact” at this point, unless someone can provide me with a compelling argument against it.

The bearings are smooth as can be too, even though they’re still a bit rusty (is that an oxymoron?). I was honestly totally shocked at how smoothly the wheel turned even with all the rust present. So I might just shine things up from the outside without popping off the drivetrain.

Off topic i know, but we used cola to remove carpet glue from a wooden stairwell. I dont know what they put in the stuff but it works far better than the chemical stuff they sell for that purpose. Even better than a rage and a ruff electric sander …

I want a unicycle that color! It would match my jersey and helment.

I took the extra time to find an example in that color, knowing what folks on this site tend to go for.

Cromovelato is really cool until it starts chipping, and flaking off of the chrome. Candy colors are similar, but over brass plating/paint which seems to hold up better.

I guess all the ones I’ve seen have been show ponies or wall hangers, come to think of it. Funky weathered old bikes with wear from a lot of normal use are cool but maybe those would be less so.

Though I’ve got an 80s Italian bike with opaque paint over a fully chromed frame, with some holdout areas that were masked during painting, and it’s held up surprisingly well. I’m pretty sure the chrome under the paint helped stop the odd rust spots that usually pop up where paint gets nicked or scratched.

If you wanted to do cromovelato you could use the same candy color paint over the chrome, and it would be cool while it lasted.

For sure. Any transparent carrier that takes a tint ought to work. My understanding of finishes bottoms out quickly, but just about anything ought to be tougher and less likely to crack than classic nitro lacquer.

I want a unicycle that color! It would match my jersey and helment.

You and me both. And FoxxyD.

You and me both. And FoxxyD.

It’s true. There’s one shop in my town that carries metallic purple paint and they have me on backorder.