It had been over 4 years since I hopped this massive 68 stairs set on my 36er, and now at 66, this turned this turned out to be the hardest, most brutal challenge of my life!

As soon as I mounted I knew it was going to be MUCH harder than last time, not just because it was cold and windy, and that I was out of practice, but also because I knew that age was catching up with me. But I pushed on. A second guy walking up behind me decided to go a different way which took some pressure off.

A bit more than halfway up it felt like my 36er weighed 100 pounds! My balance seemed to be a bit off, and I accidentally hopped backwards three different times, luckily staying on, and ended up doing 70 hops total, running out of steam on the 67th out of 68 stairs.

At least I did it and can now close the book on this crazy challenge…at least until I hit 70! 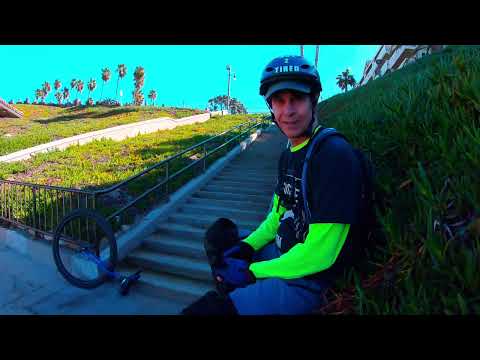 How much of an effect have you noticed from aging? At 53, I don’t notice anything quantifiable that I can equate to endurance or strength, but injuries and recovering from them are now something that I have to take very seriously as I simply don’t bounce back from them quickly anymore.

In many ways I still feel like a 25 year old, but when doing stuff like this - which would be hard at any age! - I can definitely feel a diminution of stamina compared to even a couple years ago. But there’s no doubt that without unicycling, and pushing my limits, I woudn’t be anywhere close to my current fitness level.

I thought there was no way that guy was gonna sneak by you… Sure enough!

Congrats! As always: you’re a true ispiration to all of us.

Seeing you hop up there and the deciding to walk up this way and even passing you is … snotty! fortunately he didn’d cause you to UPD.

I know two men who died of heart attacks from over exertion. One keeled over after sitting on a rock after a big climb on a cycling holiday in Spain. Terribly inconvenient for the family. The other ran up a hill and collapsed in the arms of the people he said he would catch up to.

Neither suffered for long but it was traumatic for those around them. Having said that, I don’t mind the idea of dying riding my uni. My family would probably say “He died doing what he loved.” Not nice for those who find me lying dead on the road.

Best decide what is important to you but realise you have vulnerabilities.

We’re all going to go someday and physical activity probably adds much more to your lifespan than it subtracts. I’ve probably spent thousands of times gasping for breath after strenuous activity and I’d guess that it has likely done much more to protect me from a heart attack than it has placed me at risk of one. Maybe someday I’ll strike out, but that still sounds way better than dying of cancer, emphysema or kidney failure.

You read about professional footballers collapsing and dying from a game in their 20’s, or people doing fun run marathons or half marathons and dying. So bad.

But there’s no doubt that without unicycling, and pushing my limits, I woudn’t be anywhere close to my current fitness level.

Do you do other sports, or have a fitness routine?

Congrats Terry!
Hopping is soooooo exhausting, I find what you do amazing. If I hop around for 2 mn I need to stop to catch my breath!

I know two men who died of heart attacks from over exertion.

And I know one. An important member among the french unicycling community. He was ~40 but went too hard on its heart for his last Muni day. It was something like 20 months ago and I still don’t realize he isn’t there anymore.

@UniGeezer > Thanks for your continuous investment in our sport. Hope you’ll continue having fun for lots of years!

I was asking because I remember a video where you were unicycle hopping shirtless in your backyard (?) and I was impressed with your physique. You had clearly visible abs and chest muscles, which are not widely used when unicycling.
I’m younger than you, did bouldering (rock climbing) quite intensely for 3 years and I even didn’t have that “visible” physique, even if I’m thin too (and yourself clearly don’t have a lot of body fat).

Anyway, keep going (but, as I read other messages, don’t push too hard!). You’re inspiring.

Not intend to do make fun of dramatic events of course, but your post reminds me of this quite epic marathon!

The men's marathon at the 1904 Summer Olympics in St. Louis, United States, took place on August 30 of that year, over a distance of 24.85 miles (40 km). While thirty-two athletes representing four nations competed, only 14 managed to finish the race, which proved to be a bizarre affair due to poor organization and officiating. This was the third appearance of the marathon event, which is one of 12 athletics events to have been held at every Summer Olympics. Arthur L. Newton of the United St...

You are in remarkebly good shape, especially for a 66 year old. Do you have any particular diet? [in terms of health as opposed to weight loss].

You are in remarkebly good shape, especially for a 66 year old. Do you have any particular diet? [in terms of health as opposed to weight loss

Lots of vegies and fruits, nuts, legumes, tofu, and meat is usually limited to salmon or chicken breast. Lowfat cottage cheese, yougurt, egg whites. Not at nutritional fanatic at all, just like these foods and very rarely eat red meat or fast food. Also take daily vitamins including C, D, B12, B3, B6, zinc, calcium, copper. My blood pressure has remained consistent in the 90/60 -100/65 range since replacing salt with potassium chloride (salt substitute).

I fixed the number of steps because I counted them myself and I counted 303 steps, though the Internet tells me there are 217. Weird. I could have lost track while counting, but I’m puzzled by such a difference.
Or maybe I counted my footsteps instead, likely (the stair has a few flat sections, which makes it in reality multiple stairs).

Anyway, a lot of people use these stairs in their outside fitness routine… And their efforts are rewarded by this view of the city:

fun fact: https://www.lanouvellerepublique.fr/poitiers/poitiers-il-monte-151-fois-l-escalier-des-dunes (I’ll let you translate the page in whatever language you can read)

I wasn’t happy with my last attempt at hopping my 36er up those stairs. The main reason is that I didn’t prepare adequately, and I should have waited till it was warmer, plus I used zero Q 130mm cranks, when I had always previously used 150s with Q factor. I actually thought the shorter straight cranks would give me more control but it was just the opposite, or at least it felt a lot less controllable.

So I went back and tried what I thought might be a good way to train, by hopping up the steps sideways on foot while holding a 5lb dumbbell in each hand, which is still about 5lbs lighter than the 36er I used. This was VERY hard to do! It made me really appreciate just how difficult it was to do the same thing on a 36-inch unicycle!