Why 170mm cranks are hard to find?

I was riding with several “vetran” unicyclists guys that have MUnis from almost 10 years ago.
Almost all of them had 170mm cranks on their unis - most of them rode on KH 24".
I rode with my QX 26", with 145mm cranks.
Of course, they were much more experienced riders than me and therefore they manged to climb easily uphills on single tracks where I usually ran out of enough strength/ moment to push the pedals and had to dismount.

However, apart of the technique I obviously need to improve - they all told me that the cranks length has a significant impact on the success rate when dealing with climbing steep uphill.

I was looking to buy 170 mm cranks, but I noticed that they almost don’t exist anymore.

Why is that?
Would a bike ISIS crank at that length fit my uni or not?

I’d appreciate your input on this issue.

I guess the trend towards shorter cranks has made manufacturers stop making the longer ones (At least uni-specific anyway).

That being said, Moments and Venture2’s seem to be available in 165mm (as well as 137/165mm dual-hole for the two KH cranks. Would that be long enough?

I personally enjoy 165s on both my 26 and 36er, and some would think theyre ridiculously long, but then again I like to climb steep into mountain bike territory, and give myself a good 3hr workout whenever time allows. I remember Fugs does fine on 175s on the 36er.

Would a bike ISIS crank at that length fit my uni or not?

I bought a 170 mm set (FSA Gossamer, eBay closeout two summer ago) that I’ve tried once or twice. Yes, they fit fine. There are the five spider legs sticking out and looking dangerous on the right side, but in practice it’s pretty hard to hit them. The pedal is much more likely to cause harm and we live with that.

My experience was that it felt like the saddle was both too high and too low at the same time. In the best position, I had trouble keeping my feet on the pedals at the bottom position while my knees seemed like they were nearly hitting my chest at the top. Most likely it wasn’t quite that bad. Perhaps I could get used to it.

they all told me that the cranks length has a significant impact on the success rate when dealing with climbing steep uphill.

It’s something to consider, definitely. There are uphills on the mountain bike trails I ride that I’ve never come close to thinking about being able to climb with 150s. Could it be that there’s another style or regime of riding that can’t be done with more the spin-friendly cranks that most of us use?

I have some for sale but we are too far apart

Qu-ax makes them. They’re sold by Goudurix in Canada, but you may be able to find a European Qu-ax dealer who would ship them to Israel. 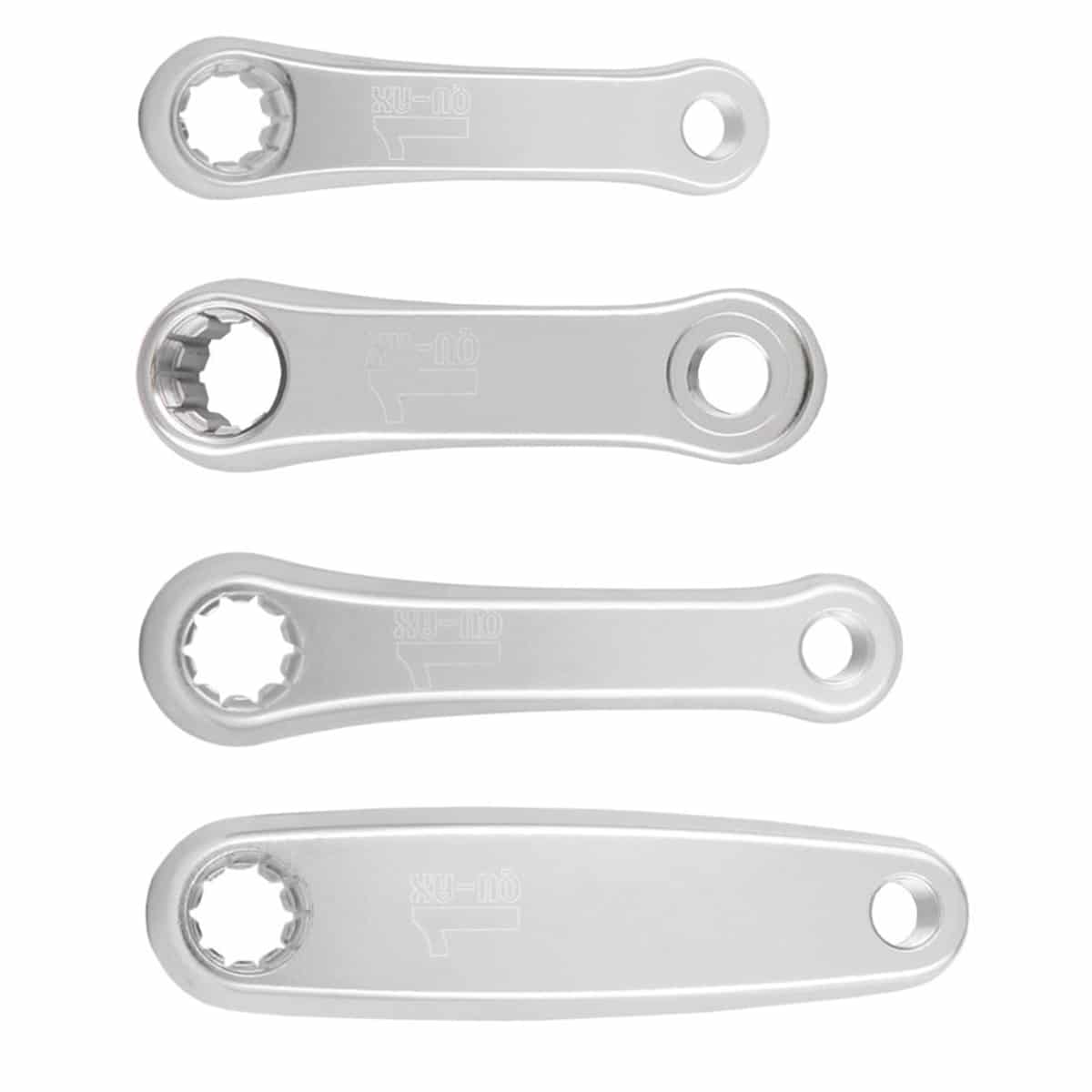 
I have a pair, but as with LargeEddie, they’re just too long for me. I do, however, like the 165s I run on my KH24 (funny how 5mm makes a difference). Yes, as UPD mentioned, most members on this forum would say they are ludicrously long, but they work for me, and yes, they get me up a lot of hills that I couldn’t make on shorter cranks (and believe me, I’ve tried many different lengths). Like all thinks unicycle, it’s very subjective, and really depends on each individual’s riding style, strength, and skill level.

I just looked it up, and the flat-rate small box from LA to any international destination shpping is only $17. (I’ll double-check this at the post office.) Since I doubt if I’ll run those cranks again (just too long for me), I’ll ship them to you if you like. PM with details if you’re interested. (I got my 165s from Nurse Ben for just the shipping, so this would kind of even it out.)

I would never ride anything more than a 150 on any unicycle, including a 36. Years ago, as was said, folks rode with longer cranks. I’m not sure why except that was probably all they had. Back in the day we had two sizes, I don’t remember what they were. We’d use one for riding and one for tricks. Now we have lots of sizes.

I really hate cranks that are too long. For example I’d only use even 150s with a 24 if I were doing trials type riding, very technical. I don’t do that kind of muni, so I ride my 24 with 137s, which are perfect.

Years ago, as was said, folks rode with longer cranks. I’m not sure why except that was probably all they had. Back in the day we had two sizes, I don’t remember what they were. We’d use one for riding and one for tricks. Now we have lots of sizes.

It’s interesting when people think that what they prefer should be the standard for everyone.
Longer cranks work better for some people.

The limiting factor for using bike cranks as uni cranks is Q factor.

Hmmm…maybe my short legs are able to tolerate them better? I know most people cannot stand "bounce or bobble that you get from longer cranks, and it only happens to me if I max out my candence for a long period of time. On muni, I dont get any of that annoying bounce, maybe due to the different riding posture. But besides that, I am perfectly comfortable on them. It’s ok on my knees too, because after 3hrs of muni, i dont feel any pain. In fact, many times it gets rid of aches associated with infrequent riding, almost as if muni is my high , equivalent to a herbal drug:D

I can’t say I recommend the Qu-Ax lightweight 170s. I got a pair for 10 bucks on sale, and I would be weary about them at that price even. The metal is so cheap that the threads dissolved after 2 or 3 installs. I can’t even get my crank puller to thread them now. Strange, because I have the 114s of the same style and they’ve been brilliant.

I used them for 36 muni, but they were too long even for that. 10 bucks was worth the experiment. : P

I just bought a pair of 170mm QuAx cranks from Goudurix. I installed them on my 26" mUni and went on a couple rides, on trails and hills which I frequent. They were great! My hill climbing was as good or better than with 165s. The big difference, though, was the q-factor on the QuAx cranks. They stick out an extra inch on either side, compared to the Ventures which I typically ran.

After having the good experience with the 170s, I put on 150s for my next ride. This helped me identify some differences between the cranks. On the 150s, I felt that I had more strength throughout the 360 degrees of the pedal cycle, while I felt weaker at the 6:00 and 12:00 position with the 170s. On a steep downhill single track, I was able to make it down with the 150s, but I was in a kind of a panic, whereas I felt more confident going down the hill with the 170s. I used the brake with both sets of cranks. I noticed with the 170s that I was tending not to ride straight, but rather in a subtle slalom. I’m sure that’d diminish with practice.

Back to the q-factor. I did not notice that added Q was desirable or detrimental. Some previous posts on q-factor stated that added Q was good for duck-footed riders. I am pigeon toed, so maybe added q is not necessary in this regard. I never had a problem bashing my ankles on the cranks, even with the straight Ventures, though the sharp right-angles in the profile of the Ventures are doing a number on my shoes.

A wider stance is supposed to be desirable for mUni, which suggests that added Q is desirable for this type of riding. However, I am a mUni handle-bar freak, riding most of the time with both hands on the bar ends. My stability seems to come from the handle-bars, so I don’t know how important it is to have added width/stability at the feet.

So, I am still confused about whether or not added q-factor, which I got moving from Venture 165s to QuAx 170…is a good thing.

I have a possible answer to the question of why more people in the past ran 170mm cranks. Perhaps it is because more riders held their arms out in the air. Without the increased leverage of holding the seat or a handle, it seems that the leverage would need to be put in the cranks.

It’s interesting when people think that what they prefer should be the standard for everyone.
Longer cranks work better for some people.

I never said they should be the standard. I am saying that the majority of people prefer what I prefer as is evidenced by the fact that cranks longer than 150s are no longer standard on the grand majority of unicycles, and apparently 175s are hard to come by, when a decade ago they were standard for that kind of riding. Muni is a small market and my guess is that manufacturers and distributors generally don’t have the leeway to cater to minority preferences. That’s just my guess, which could certainly be wrong.

I don’t care what size crank you ride. I was simply answering the question of the OP.

Longer cranks are harder to pedal as fast or as smoothly. From what I’ve read & talking to other riders, most learn the technique for getting up steep hills on shorter cranks.

I rode a friends Muni w/ 165’s and I was shocked at how much easier it was to pedal smoothly. But I can’t keep my speed or momentum up enough. Soon after I have to resort to half cranks, I UPD.

I noticed a similar difference in going up to a 26" Muni (also w/ 170’s). Provided I could handle the effective taller gearing and maintain a smooth cadence, it was easier. But if I had to resort to half cranks, getting up the hill was harder and more likely to UPD than my 24.

Also my 170’s give a lot more control when it gets technical. That and the ability on up/down hills is well worth the boxy pedaling and more frequent pedal strikes for me.

If my legs and abs are really strong, I find it easier to pedal fast, smooth and initiate drive at the top & bottom of the pedal stroke, keeping drive force for more of each revolution.