Out riding my BC, UW and doing some grinding today…should’ve stopped after the UW, haha! Had my worst fall ever doing a grind, and even heard a “snap” as I hit my backside and my head snapped back so far I thought it was going to break off!

I had just sprayed silicone lube on both the rail and cranks! I guess there is such a thing as too slippery!!! Went home, took a few advils and iced it and now feel better, but i’m sure it will smart in the morning. Just lucky because it could have been much worse! :o Yikes. Were you sore afterward?

Ouch, sorry to hear about this. I had a bad whiplash (bicycle) fall back in October, and it took a couple of months before my neck was back to semi-normal. Hopefully you recover much much faster!

Yeah, pretty sore after but Advil and ice pack helped a lot. The video makes it look like I hit my back too, on the edge of the rail, but somehow I missed it completely, if only by a hair! Could be because I instinctively thrust my right arm to the ground to help soften the landing, sustaining a nice cut to the palm. But that’s better than the alternative!

Ouch! That looked painful. Wishing you a speedy recovery and a belated happy birthday.

Thanks! Yes, painful mostly the next day, (1/23/16) the very day I was supposed to do a group MUni ride. But I still went and had a blast. Just tried not to do anything to extreme. 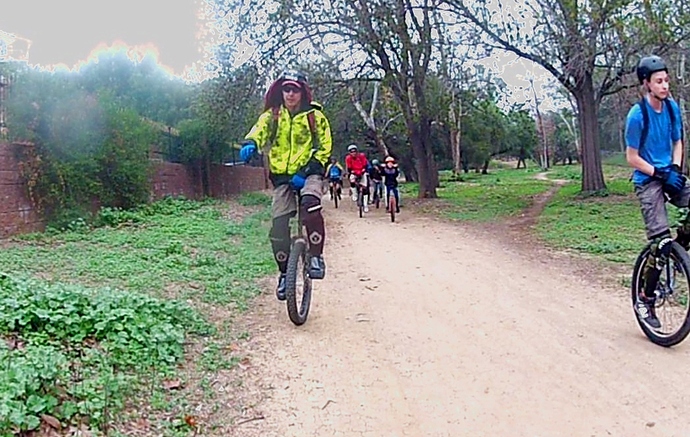 Why do you lube the rail and cranks? I think with proper technique you shouldn’t need to lubricate it.

Why do you lube the rail and cranks? I think with proper technique you shouldn’t need to lubricate it.

I usually use wax, like skateboarders use for grinding rails. I was temporarily out so I used the spray lube which turned out to be a bad idea.