What crank sizes do you ride on your 36ers?

I’m not very experienced with 36er. But I recently had to replace my cranks, so I changed from 125mm to 150mm. I have a LOT of control with the 125s, and light muni has been a blast. If I were riding a lot of road, I would definitely change over to 125mm and learn to ride them efficiently. Some 36er masters go as low as 110mm.

As with any crank choice on any size uni, longer crank = more leverage, and easier control. But it also is more strenuous to pedal fast. Shorter cranks are easier to spin faster, but when you need the leverage (muni, upphills, downhills) it can be a lot harder on yourself with less leverage. Of course brakes can solve the downhill problem.

I’m sure there are a million posts here on 36ers and crank length. Do a search.

It may be useful for when you have to dismount and mount a lot since longer cranks make mounting the 36 easier, but with some practice I freemounted the 127s easy enough, with probably a 90-95% success rate and they are so much smoother and faster that I can’t see using the 150s unless I was really going up some very steep hills.

I have KH Spirit 137/110 dual hole. For the longest time I was using 150s, but I gradually went down to the 110s. I’m still able to do a lot of hills with the 110s. I don’t carry a pedal wrench with me and honestly really don’t like to, nor do I feel the need, to change to the 137s. The 110s are a really good overall crank length for me. I only do street riding.

I am tempted to try 110s, but worry about my knees and loss of control. I have a few short, steep hills on my commute too.

170 is way too long, it was an experiment using some bike cranks and it felt like i was climbing a mountain with every stroke. It did make the uni feel like a 26er with turning circle issues though.

125 has lots of control and is nice for general riding including cross country.

114 is getting short. There is much less control and the anticipation distance when you need to slow down or react to anything is getting quite long. However it is great for riding on smooth surfaces (tarmac, dirt or gravel) as long as the path is pretty straight and there are no hills. Freemounting is hard work.

Haha, bumps and hills scare me riding the 29" on 114 cranks, but I still have the control on the whole that I want. Ride to work on the 137’s this morning was about 1 or 2 minutes faster tthan the same ride on 150’s. Don’t know if the crank size helped, but going to nail freemountinf the 137’s then going to 125’s

What kind of average KPH can you hit with 100’s?

my average speed varies on the terrain. In traffic I tend to ride at about 25kph, on open flat roads my comfortable speed is 27kph

I need to get training if I have any hope of a decent time at Dusseldorf!!! :0

I have 125s, but I’ve been thinking about trying 150s. It seems like a spend a lot of my energy mounting, so I’m wondering if longer cranks will help preserve some of that energy.

I cant imagine much shorter than 125s in traffic and hills. The idea for me is to get to work and have fun.

Roulette - its the spin of the wheel 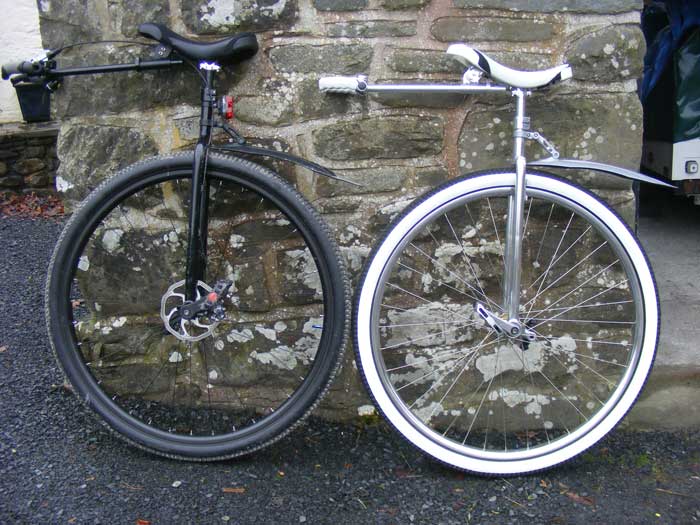 I can still communicate in far-eastern languages

I have my 36er fitted with KH 110/127 twin hole moment cranks. I generally ride on the 110 setting on level terrain with the 127 option for cycling into a fast wind.

If I was going to use shorter cranks then I would increase my tyre pressure.

I reckon that tyre pressure should also be considered when choosing crank lengths.

I tried 89s but ended up walking down some of the hills I ride. Running in downtown traffic also seemed suicidal.