We keep hex and pedal wrenches, an extra tube, 12v pump, etc. in the car “just in case.” I was wondering if anyone has seen a good multi or pocket tool that might be useful in the same way. I’m thinking something like the following, but this one is designed for skateboards.

I bought the qu ax toolkit from udc, it is a workshop type kit in a hard case, but has a uni-specific multi tool for carrying on a ride. Though to be honest, most of my rides are within a 20min walk from home anyway so I tend not to carry anything!
I think the qu ax multi tool is available on its own on udc.

Be careful how you carry your multi tool. I put mine in a lower-thigh side pocket, and ended up with a multi tool-shaped bruise after a hard landing. I recommend making your kids carry it.

I guess you need to decide what you want to be able to fix and pack appropriately. A 5mm Allen key to adjust seat height and bearing caps on the go can be very handy and consumes minimal space and weight. Add a 4mm key as well if you have a handlebar which requires it. These should also cover the majority of brake adjustment if applicable.

Probably the only other thing you’re likely to use is something to remove and replace pedals if you use dual hole cranks. Some pedals can take a 6 or 8mm hex key so the simplest option is to carry a dedicated Allen wrench with a long arm.

If I think really hard about it there are a few more tools which I could potentially use and might be able to find in a multi tool. I don’t think I’d really want to use them on the side of the road/trail though:

Of course, if I was touring across the country I’d bring a more substantial toolkit. Or maybe if I was riding trails in a busy area and wanted to help out other broken-down cyclists.

TL;DR - For a simple uni you can probably get away with just carrying a 5mm Allen key rather than a bulky and annoying multi tool. Add a 4mm Allen key and/or pedal wrench of some description if needs dictate.

I use this one and it has worked fine in emergencies.

Just about any bike multitool (including the one recommended in a previous post) will work fine, but for minimalism, I like the Topeak Toolstick 11. It has 3, 4 and 5 mm allen wrenches and a philips screwdriver in a simple, stick-shaped tool. There are two tools at either end and the way they pivot you’re able to get a little bit of leverage if you need it, or you can straighten the tool and get into tight spaces (it’ll make more sense if you see it). These tools are good for the vast majority of road/trail-side repairs. What it won’t help with is crank-arm or pedal repairs, but so I sometimes also carry a large 8 mm allen key for that.

Do unicycles really break down?

I’ve been riding my Nimbus muni daily for years and I’ve never had to fix anything on the road.

Never needed anything on my tours than a pedal wrench and an allen key when I change pedal positions. I only take some tool with me on longer tours but never needed it.
Maybe it works like an umbrella: if you take one with you, you won’t need it and if not, it will rain cats and dogs …

Same as everybody: a couple of allen wrenches in case I want to change the saddle height / angle. And a wrench given when I got my first uni from udc-uk :
http://www.unicycle.uk.com/safety-equipment/tools/unicycle-com-wrench.html
lighter than a pedal wrench, ideal to change holes on the spot on my KH cranks.

I carry a fairly complete tool set with me, which includes a tire repair kit (patches, CO2 cartridges, tire lever), hex key set, small adjustable wrench, multiple-bit screwdriver, knife, spoke key, and probably some other stuff I can’t remember off the top of my head.
My pack also includes a fairly complete first aid kit (different size bandaids, anti-septic ointment, surgical tape, an Ace bandage, Advil tablets), kleenex/wet wipes, pen and paper, and snacks/water.
I’ve used every one of those things at one time or another. I prefer to be as prepared as I can be when I’m miles from home or car. (The whole thing is pretty compact, too, not very intrusive to carry.)

I’ve been riding my Nimbus muni daily for years and I’ve never had to fix anything on the road.

For me it’s two things: a preference for being prepared and a carryover from riding b*kes. After hundreds of miles unicycling on-road and off, the only mechanical problems I’ve encountered were a loose crankarm and a couple of flats. Even a large multi-tool takes up little space and adds an irrelevant amount of weight to my pack. But I ride with others, and they’ve been grateful when I’ve been able to help them change a saddle height or seat angle on the fly.

I like to play with seat height as well, but I avoid the need for a tool by using quick release seat clamps. (Wasn’t someone supposed to perfect quick release bearing holders for us??)

I carry a fairly complete tool set with me, which includes a tire repair kit (patches, CO2 cartridges, tire lever), hex key set, small adjustable wrench, multiple-bit screwdriver, knife, spoke key, and probably some other stuff I can’t remember off the top of my head.
My pack also includes a fairly complete first aid kit (different size bandaids, anti-septic ointment, surgical tape, an Ace bandage, Advil tablets), kleenex/wet wipes, pen and paper, and snacks/water.
I’ve used every one of those things at one time or another. I prefer to be as prepared as I can be when I’m miles from home or car. (The whole thing is pretty compact, too, not very intrusive to carry.)

I want you to move to GA to ride with me! In all seriousness, how do you carry it all? Backpack I assume.

Allen keys at a bare minimum. I have a park tool MT-1 in almost every uni bag I own. Incredibly simple, one piece molded allen keys. “Features 3, 4, 5, 6 and 8mm hex keys, 8, 9, and 10mm socket wrenches and a flatblade screwdriver” By far my favorite multi-tool.

The other thing I have in my main riding bag is a 15mm cone wrench that can be used as a pedal wrench, but is much lighter. It is of course, not meant for the job, but it’ll get the job done, and isn’t used often, so I’m not worried about its durability. Pierrox’s wrench linked above is a similar (probably better) idea.

I also carry this pump in my main bag: http://www.lezyne.com/product-hpumps-hp-microflrhp.php#.VmBohHarRpg (lezyne micro floor pump) which is very light, about as much as a large 8mm allen key I used to keep in my bag. I have stick on patches, and probably some of the classic patches down in the bottom of the bag. They don’t weigh much.

If I’m on a particularly intense/unfamiliar trail, I’ll carry a small blood clotter pack. They weigh pretty much nothing, and are in case of particularly nasty open wounds. Peace of mind really, but I’ve only ever carried it once. It’s usually in my touring bike kit.

How do you carry it all? Backpack I assume.

A lot of guys use backpacks, but I prefer to carry the weight lower, in a hip pack. (Picture from a recent group ride.) 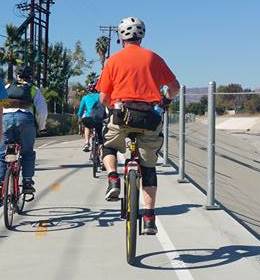 I actually do carry tyre levers, patches and a pump as well. But I really hope I never have to use that tiny pump on my 36er tyre!

ahh I do have those…pedros, so lite I forgot them.

The lezyne pump I have was infact used for a 36er tire, on the san francisco ride even. Worked pretty well for a hand pump. That’s why I have the floor version. : )

The lezyne pump I have was infact used for a 36er tire, on the san francisco ride even. Worked pretty well for a hand pump. That’s why I have the floor version. : )

Yeah, the floor version is the way to go. I have this one, and it’s great how tiny it is but it’s a bit of a pain to use (as most mini pumps are).

Still, it’ll do in an emergency.

The trials is the only wheel I use levers on and can do without if need be.

I carry 3 allen keys (frame, pedal, crank), a torx wrench (disk), a patch kit, a pump, and some tape, as well as a regular multi-tool and a lighter for the non-unicycle just in case scenarios. On tours I will have a few spokes taped to the frame and add some nipples and a spoke key as well.

The best tools to carry on rides are highly dependent upon what it is you’re riding. Back in the day, I would have a couple of adjustable crescent wrenches handy. It was a Schwinn, which meant you needed two wrenches to adjust the seat height.

But I rarely carried those with me, because most rides in the Schwinn days were not of distance.

In later years, it was important to be able to tighten your crank nuts. There’s nothing like having your crank come loose at the turn-around point of a 10-mile trail ride. I also carried “The $5 Crank Nut”. This was a spare that would cost a fellow rider $5 if they needed it. Those got used a few times, but I never actually charged anyone the $5. I think I’ve finally stopped carrying one of those now; nobody on muni rides is on anything that uses crank nuts anymore. Maybe old Cokers on Road rides, but that would be about it.

My most-used tool on rides is a Park multi-tool (I think it came from UDC) that has 4, 5 and 6mm hexes, a philips and a flat screwdriver. Big enough to get some decent leverage, but not so big that it hogs the pack. I also carry a non-metric, I think 9/32 hex wrench for the Profile cranks and bearing bolts on my Wilder Muni. In addition I have a Schlumpf tool, and the tiny hex wrench that’s needed for tightening/adjusting the shift buttons.

I do have a lightweight set of tire levers in my Camelbak, as well as a tiny patch kit, and a Topeak Mountain Morph mini-pump, which is probably 10 years old or more. It’s an excellent pump for bringing on rides. It’s very light, and does Presta or Schrader. In fact, I just looked it up on their website. They still make it, and it’s almost identical to my old one! Yes, it’s no fun pumping up a 36" tire with one of those (especially when it has a fast leak and you’re trying to get back to the car), but any mini pump will suck at that.

A lot of guys use backpacks, but I prefer to carry the weight lower, in a hip pack. (Picture from a recent group ride.)

Gotcha; I like the idea of that type of pack with the water bottle pockets. I suppose for the short term I’ll just use my trusty old Camelbak (20 years old now).