I was riding today when my handle snapped and came off in my hand. 5 minutes earlier I had been pulling up on it as I was going down a steep hill. Fortunately, when it snapped, I was on the flat. I didn’t fall off.

See the attached photos and diagram. This is a Nimbus handle set but I imagine that the same could happen with the KH.

When I fitted the handle, I wanted it with a short stem and cut it down. Later, as I got more confident, I pulled the handle forward. The result was only one thickness of metal just in front of the weld, so there was a weak spot. If I had cut 2" less off, it would not have snapped.

Check yours. This could have been nasty. I was on a 36 inch uni on a public road. I could as easily have been descending a steep rough hill. 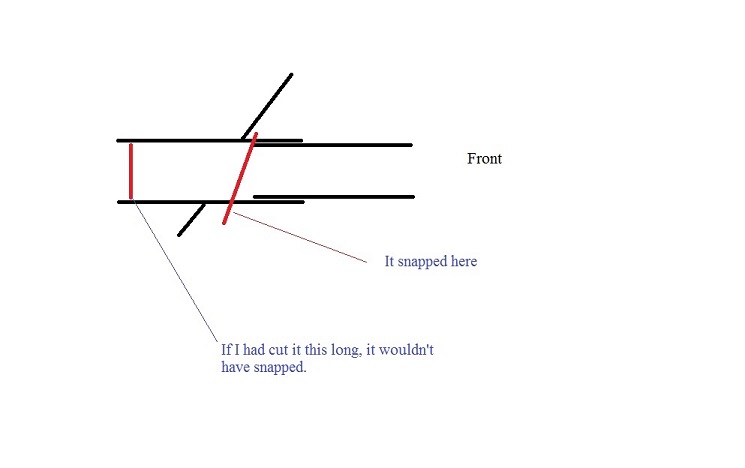 It has nothing to do with where you cut it. It snapped off because you are the most powerful man in the universe. Face it…deal with it. I know it is an awesome responsibility but the rest of us are counting on you.

If I had cut 2" less off, it would not have snapped.

Yes, you definitely are a burly stud.

More seriously, you definitely want your handle tube to extend past the gusset. And based on earlier issues people reported, it might not be a great thing to have it pushed all the way back, as that might also give the handle tube undue leverage to stress the larger tube. Best to push it all the way in, then back it off 1/8" inch or so, to be safe.

I’ve broken three of these, all with the handlebar tube inserted almost all the way as described above. One of those was after a repair of an earlier break. I really like the handle, but it does have its weaknesses. By being really light, it sacrifices some strength, and like any long handle it’s vulnerable to damage in a crash. That’s hard to get around without having lots of reinforcement to the handlebar, which would add weight.

Roger fromUnicycle.uk.com has confirmed to me that later versions are reinforced. My handle was 2 to 3 years old.