Putting a light on a unicycle

Has anyone put a light on a unicycle? What’s the easiest way to do this? Can I just get a bicycle light and mount it sideways? Clearly it can’t interfere with my legs while peddling. Thanks.

I bought two bicycle lights (one a tail light, the other white light) they are designed to just bolt onto any straight pipe (bicycle handlebars for example). I put the brake light right under my seat pointed back and set it to flash - just so cars can see me. I hold the other one in my hand since the unicycle moves around too much (I think) to provide good light in front. I’ve dropped it dozens of times and no damage to the brake light since it is about 1 inch from the seat and well protected from hitting the ground.

What kind of light are we talking about? Is this so you can see where you are going? on-road or off-road? Winter is coming (actually it’s here) are you going to be using it in cold temps?

If you just want a rear red light that’s super easy, just mount it on the seatpost low enough that you won’t obscure it with a winter jacket.

If you want a front facing light so you can see the trail or road you will get leg-shaddow unless it is mounted far enough forward to clear your legs, this is easiest if you have a handlebar. You still want it far enough back that you won’t smash it on the ground when you drop the unicycle.

Lithium Ion batteries, while expensive are really the way to go if you need high light output in temperatures much below freezing.

I wanted the light to see the street ahead. I do have a head lamp. It’s not that bright but maybe it’s time for a better headlamp. I hadn’t thought about the fact that if I mounted it when the unicycle falls it would probably break. Good point. I wear a reflective vest. I hadn’t considered a back light.

Here is an old pic of a setup I used for one winter. It was just a cheap LED light with the reflector removed to give a nice flood pattern. It did not shine far (that is what my headlamp was for) but did a good job of letting me see the texture of the ground up to 10m or so in front of me.

Before that setup I had it further back and had very distracting leg shadows all the time. I have also just held a flashlight in my hand to get a good low angle beam. 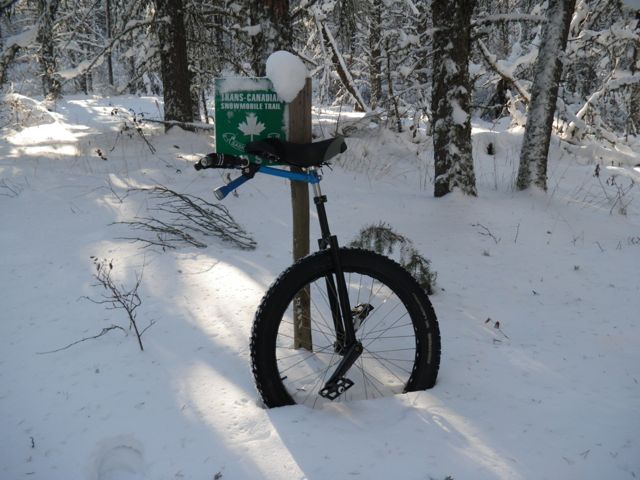 Just use a helmet mount. I’ve had my Niterider for over a year. It’s cheap, bright like a car’s headlight, charges on usb, and weighs next to nothing. This is one of the easiest problems to solve.

This one here works very well for a backlight (attaches to the seatpost with a rubber band that comes with it):
http://www.amazon.com/gp/product/B00W7Y27CQ

There is also a white version of the same light, though I find a helmet-mounted light much more useful for that (much stronger). For that I have this one here:
http://www.amazon.com/gp/product/B00LXTOPNU
It’s a bit pricey, but well worth it in my opinion. I use it almost every night.

Here’s a pic of my 36er with the light on the handlebar: 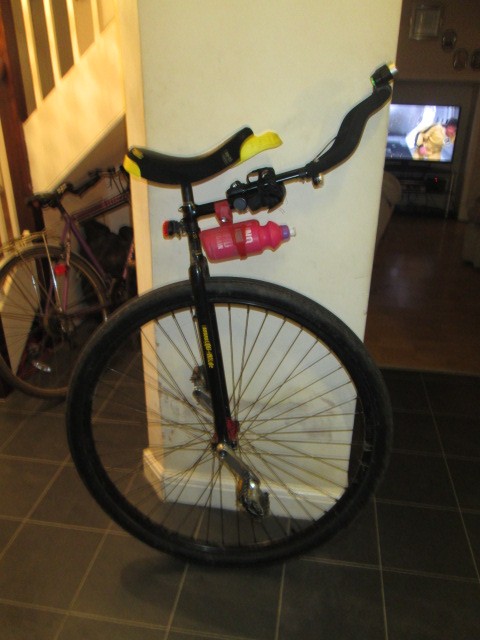 I’m just using a cheapo front + rear bike light (red + white LED’s) with a Cree light I got off Amazon.

Here’s a pic of my 29er with the setup I used pre-handlebars on the 36er too: 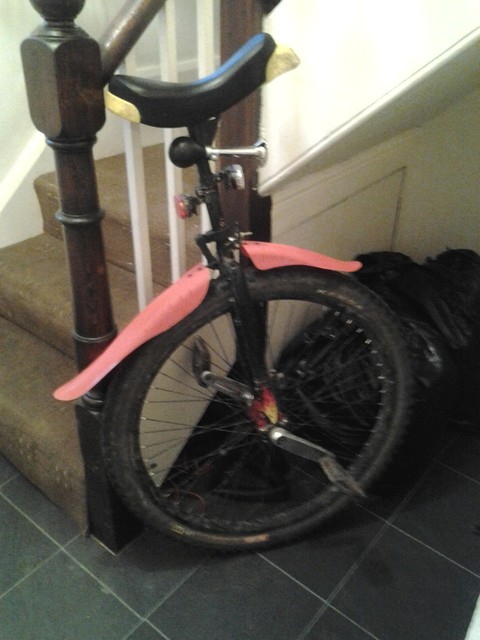 As you can see, again it’s the cheapo lights - I just bought two packets of them, and used the rear light bracket for both of them (So the front one didn’t end up being turned 90 degrees). These are purely for legal reasons (so cars can see me) as opposed to for lighting the road so I can see. For this I either use the handlebar-mounted setup on the 36er or strap the light to my head (Mostly the head thing these days as I kept breaking the light when my handlebar hit the deck…)

Thanks for all the suggestions. YooNeeNoob, which Niterider did you buy? Did you buy the light and a mount for the helmet or is there one that is all included? About how much was it?

For my usual mainly off-road ride I use a helmet light but I think in the UK it’s a legal requirement to have a light on the frame if you ride on the road? Others may correct me on that though!
I have also ordered a wrist mounted torch on amazon which claims 200 lumens for 2hrs so I’ll post on here with a review when it arrives from China.
On the rear I have a small seatpost mounted bike light and I use a runners armband which is reflective hi-viz with a red led.
I’ve not been hit by any cars yet, but dogs don’t seem to like the red flashing leds!

Rode with several unicyclists last week, and one of them had one of those strong lights (yet lightweight) on his wrist. That makes sense since you can point it more precisely than a handlebar mounted light. A combination of both is probably ideal for off-road.
Not a big fan of helmet mounted ones as having the light source coming from your eyes distorts the perspectives because of the way shadows are laid out. (Don’t know if that sentence makes sense, probably lost in translation somewhere).

I have this Night Rider (750) that I got on sale at REI. I’ve used it for the past couple of weeks when riding home at dusk. The lowest setting has been fine. This summer I used it while riding in a 2 mile tunnel and had it set at the highest setting which worked very well. Yes it comes with a helmet mount. There are several models. You might only need a 550 or 350 which are less expensive. Do a search on the web for reviews. I think you’ll be able to find pictures that show how bright the lights are.

they are available in white and red and can be installed on the lower frame without getting in the way.

these are also nice:

don’t bother with these. They are nice but your wheel needs to spin very fast. 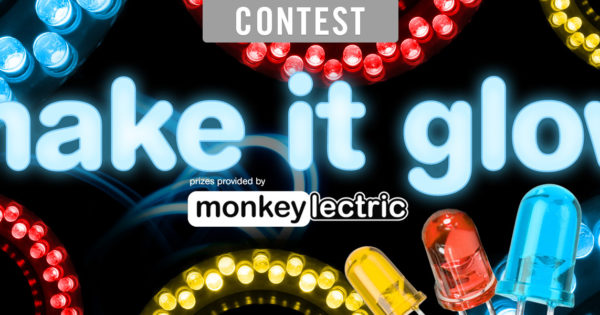 A15. M210. M204. THE BRIGHTEST AND MOST DURABLE. We are the world leader in bike wheel lights. Our LED-based lights are the brightest and most durable on the market and provide 360 degree visibility for commuter cyclists. Each model features bright,...

The one with four arms is very expensive…

I think in the UK it’s a legal requirement to have a light on the frame if you ride on the road? Others may correct me on that though!

You are correct. Regulation 3 of the Road Vehicles Lighting Regulations 1989 defines a pedal cycle as:
“A vehicle which is not constructed or adapted to be propelled by mechanical power and which is equipped with pedals”

IANAL, but I can’t see any way in which that wouldn’t cover unicycles. Which means that unicycles are covered by the same lighting regulations as bicycles.

FWIW I find that a pair of Moon Comets (one mounted vertically either side of the fork) works well for commuting on unlit cycle paths on my 29":
http://www.moon-sport.com/product-detail.php?id=71

It’s important to make sure the charging port is properly plugged in the wet, though. I destroyed one by leaving it on my bike with the port cover not properly seated when it was parked outside during a day of torrential rain, and they’re not cheap

(I guess the same is probably true of any USB rechargeable light).

FWIW I find that a pair of Moon Comets (one mounted vertically either side of the fork) works well for commuting on unlit cycle paths on my 29":
http://www.moon-sport.com/product-detail.php?id=71

It’s important to make sure the charging port is properly plugged in the wet, though. I destroyed one by leaving it on my bike with the port cover not properly seated when it was parked outside during a day of torrential rain, and they’re not cheap

(I guess the same is probably true of any USB rechargeable light).

Those look like great lights! As you said though, I’m always weary of using expensive electronic stuff on my bike/uni as it rains a lot here

My cheapo LBS bike lights work well enough and have stood up to the rain so far.

A frame mounted front light blinds me when I mount (angle of frame). So I use a hand held NightRider Lumina 500 combined with a small led flasher on the frame (peanuts from Lidl in the UK).

A frame mounted front light blinds me when I mount (angle of frame).

I had that problem until I moved the light further down the seat post. It would still be a problem if it were aimed for distance but I have it angled down to light the area immediately in front of the uni.

I have another light on my helmet for the distance.

a little old school bt ya could try this…

fr not wearing a helemt 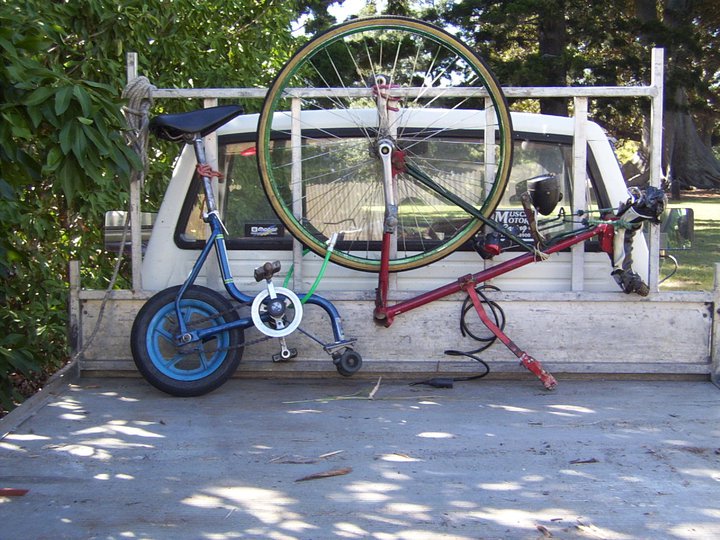 While I tend to wear a helmet I really disagree with them being legislated as necessary.

Lights/reflectors I can see for nighttime use though. I won’t have a friend bike home in the dark without something reflective or lit up making them visible to all the drivers who aren’t paying as much attention as they should.

I like what you did with that 27. How did you attach the bearing holders to the frame?