Are you painting the rim or the frame? It’s a little confusing.

Way more info than any of us would have about the stuff: 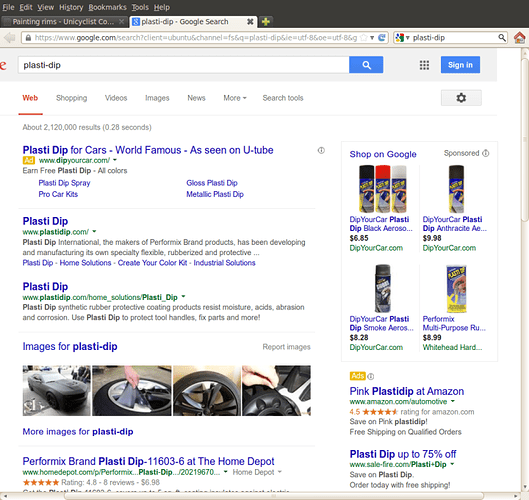 Way more info than any of us would have about the stuff:

Or if you are feeling a bit more snarky try this: lmgtfy.com.

Who says sarcasm doesn’t come through on the web?

Some replies I received when I posted the same question a few weeks ago, which may of use.

I want to respray the rim on my Oracle. I think it is powder coated? Does anyone have recommendations as to which type of spray paint to use, particularly with regard to scratch resistance?

I’m painting the rim not the frame

Someone on here (Knoxuni?) plasti dipped their cranks and it didn’t work worth a damn. My rim takes more of a beating than my cranks do (Muni though, trials’d probably be different), so I can’t imagine it working very well. I’d say powder coat is about the only good option.

Or if you are feeling a bit more snarky try this: lmgtfy.com.

Who says sarcasm doesn’t come through on the web?

I’ll have to use that in the future.

Maybe it means I’m old that I remember when Plasti Dip was just one thing: a can of liquid stuff that you dipped your tools into to put a grippy rubbery coating on the handles. That wouldn’t work out well mechanically for covering a rim and wouldn’t be what most folks would think of as painting. But there seem to be a number of products out now with the Plasti Dip name, and plenty of retailers selling them.

Note that there’s also “Plasti-Kote” touchup paint for cars which you find in auto parts stores. I’ve used it on rims and recommended it in that other thread. The name is close enough that they could get mixed up but they don’t seem connected any other way.

For any kind of paint, you’d at least wash and degrease well, scuff the gloss off the surface with sandpaper, wash and degrease again, and then give it plenty of time to dry completely before painting. If the old paint/powder is bad enough that bare metal shows, definitely use primer first.

Weird I just tried the link I put up, and it didn’t work. Here’s another one for anyone who hasn’t seen “let me google that for you”.

I would recommend Duracoat. It is a finish designed for firearms but works great on almost anything. They just recently released it in an aerosol can too.

There aren’t a ton of color options but its relatively cheap and easy to do.

Good call on the Duracoat, SickPythons. I hadn’t previously thought of looking to the firearms industry for coatings, but it makes sense. I watched the link you posted, and several associated ones, and I think I’ll give that stuff a try next time I need to paint something on my uni (or whatever).
cheers!