I can add that the fusion one + handlebar is great: I feel like a king on his throne. And I cannot figure how to use the Naomi saddle… maybe is it light and used only for trials?

I’ve never tested a Naomy saddle, but as i understand it, Impact is not a brand well known for long distance unicycling …

There are worse saddles than the Naomi. The Impact Athmos saddle. Basically it is the Naomi without as much padding.

Part of efficient riding is being able to sit. A good saddle is essential if you are going to sit for an hour.

Does it make sense if I add padding? Maybe a bike gel saddle cover? Or it will enlarge the saddle base making the side wobbling more harmful? I can’t understand if it is a hard surface sitting problem or a saddle friction

I rode 80 something miles in a day on a Naomi saddle once, I used to love it until I did that!

The saddle is fairly thin (Compared to my Stadium, that’s fairly deep on the sides) so you might just be clawing at your legs on the edges. Is your other saddle thinner than the Naomi (When looking at it from the top)? You might also be sitting ever so slightly more bow-legged on the stadium which if you’re not used to it could be straining your thighs a bit.

Also bear in mind that because it’s thinner (looking from the side) your height might be slightly off compared to your other saddle!

I have done a 12 mile ride with the Naomi saddle on my 24". With padded bike shorts. There are no bar ends on that setup. I tend to ride as far back on the saddle as possible while keeping both hands pressing down on the grab handle. In this position, I’m best able to find my sit bones while taking a lot of weight off my seat, into my arms.

I weigh 210 lbs. My preference would be for the Naomi to be a little bit more firm. Since I’m concentrating my weight at the back corners of the saddle, the foam bottoms out a bit more than I prefer. Still, it’s a very good saddle.

My favorite saddle is on my 26", a 1st-generation Stadium. Some people were discussing on the forum how Nimbus made the 1-gen Stadiums too hard, then softened them up in the second generation. I like a firmer saddle, however. Once my default riding position changed to two-hands-on-the-bar/saddle, a more firm saddle, closer to what we have on bicycles, became my preference.

It’s not just the padding. I have an old Miyata saddle on my 28 and I did my longest ever ride on it. It has virtually no padding but it’s a nice shape.

You can reduce seat pain by adjusting the seat up or down, adjusting the tilt of the seat, using shorter cranks, adjusting your riding position, adding or changing your bars, or wearing padded shorts. The best solution of all, though, is to build up your endurance and learn to take your weight off the saddle from time to time.

There is another source of pain, and that is chafing, rather than weight/pressure. I find that wearing cycle shorts under longs allows the shorts to move with my legs within the longs. Talcum powder provides a good lubricant. The other thing, although a little inelegant, is to reach down inside the front with your hand and adjust everything into the most comfortable position.

I did 2 hours without a dismount a few days ago, somewhere over 20 miles including hills up and down, but nothing that required me to stand on the pedals for power. By the end, the soft tissue around my sit bones knew I’d done it, but the point is, it was possible. That was on a KH Freeride.

I have done 2 x 1 hour bicycle rides today and was no more comfortable at the end than I would have been after 2 x 1 hour unicycle rides.

I can add that the fusion one + handlebar is great: I feel like a king on his throne. And I cannot figure how to use the Naomi saddle… maybe is it light and used only for trials?

I have a Naomi for my commuter/touring unicycle and it works fine. It’s probably the best curved unicycle seat for distance, and beats most of the overstuffed unicycle seats out there. I had it on the SINZ II Unicycle tour, and also ride it to work and back (46km) each day.

10 mile ride today:
Saddle with the front part tilted as low as possible, lightly padded shorts… During the fist part of the ride no issue at all. It seems again the best saddle I’ve ever ridden.
In the afternoon I was completely tired and was riding quickly back to the car to drive and pick up my family where I left them… than the saddle become again an evil torture…
I analyzed it: when I was done and can’t ride well due to tiredness I feel like I was sitting better in the saddle: cannot push strong on pedals anymore, so my back was heavy on the saddle… I unicycle better when tired! But than again heavy saddle problem till I reached the car.

The answer is: when I ride too heavy on the saddle than it hurt me. When riding with a bit of weight on the pedals, like I do on gravel or low grass than I can ride for hours without any pain in my back (but fatiguing my legs!)

Saddle with the front part tilted as low as possible

If you tilt the front part of the seat down to avoid coming into contact with it, you may end up sliding forward toward the front. If the nose/front of the seat is tilted up, that may make you more likely to stay on the wider back on the saddle. Can you explain your reasoning for tilting the front of the saddle down?

I think: front up= sit in the back but lot of chafing.
front down= sit in the middle if you don’t push on the handle, less chafing

When front part is tilted down it requires me several adjustments on pedals and saddle to sit comfortably in the back. Otherwise I sit completely on my crotch.

That is a reason to explain why I hurt myself when tired: too mu h weight in the saddle, but I end up sitting towards the front. Maybe I should tilt a little up the front when tired

When front part is tilted down it requires me several adjustments on pedals and saddle to sit comfortably in the back. Otherwise I sit completely on my crotch.

Thanks for explaining. I also have the nose tilted down for XC riding. This raises up the back on the saddle, and I’m able to engage my sit bones with the raised back corners of the saddle. I’m able to stabilize myself in this position with the bar ends. Without the help of my hands, I would slide onto the narrow part of the seat.

I’m a fan of the nose being tilted up.

Sounds like you might too just maybe with some conditioning.
Try nose up for a whole week.

On a hour+ ride, 99% of riders would be sore on any new seat without conditioning.

Or… be done with it and get another throne. (fusion one and bars)
I’m a Freeride fan on my two 29s (muni) but I’m going to give a Fusion One a chance on my new KH36.

I flattened an old KH fusion saddle and discovered it is exactly the same saddle of the Huni-rex… so I flattened the base of the Huni-rex saddle and than remove the cushion part. I cut a lower, thinner, firmer foam spare I found somewhere. I dig a big hole in the center and than fixed again the cover… I was lucky and my first handmade saddle is my best choice now when going without handlebars! 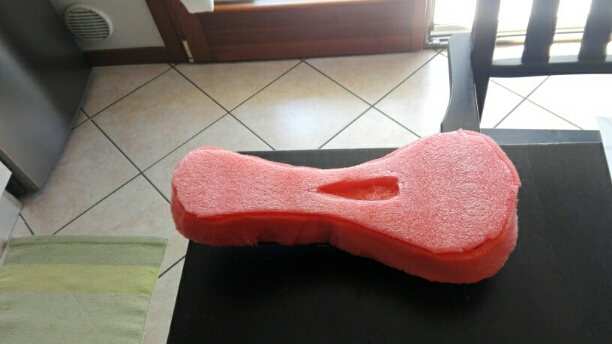 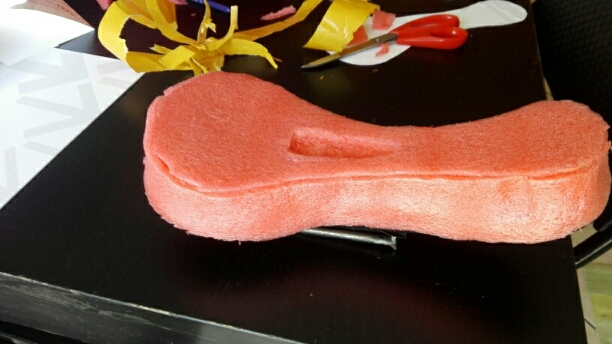 Yesterday did a 13 km race with 2 steep hills (where I UPD and walk uphill) with a 25% gravel and pothholes… the saddle with the cut-out proved great during a 1+ hour ride! I can suggest: IF YOU OWN A SPARE SADDLE TRY TO MOD IT WITH A SIMPLE KNIFE! It’s easy to achieve a better genital sit… however after 1 hour I can feel little pain, but now it is completely manageble.
Also I left less than 1mm foam on sides of the saddle… than cafhing has vanished completely.
Now the saddle has no nose down tilt. It is flat for the most part with thw nose slightly pointing upward

I’ve tried a regular curved saddle and the KH Fusion One—not a particularly large sample—but I’ve found riding comfort and consequently skill have both improved with the latter. It has completely eliminated inner thigh chafing thanks to it being thinner. Still, it isn’t perfect and it causes discomfort on the inside of the sit bones which seems to be the point of highest pressure.

I think what all saddles are really missing is the ability to adjust the forward-backward position of the seatpost relative to the saddle. I’d like mine further back, at least an inch.

I think what all saddles are really missing is the ability to adjust the forward-backward position of the seatpost relative to the saddle. I’d like mine further back, at least an inch.

Assuming you’re not using handlebars, tipping the saddle forward will have the same effect. Or to put it another way, sliding the saddle back will result in the nose tipping forward once you find your center of gravity.

In fact, with a traditional four bolt saddle angling the nose down makes it slide backwards in the mount anyway, so the effect will be even more pronounced.

There’s a thread about this somewhere.