Is anyone sporting an custom aluminum flat saddle frame on their Uni?

I have my prototype being cut and welded at the moment and will be testing it soon on my KH29 Guni for the Tasmanian Wildside Mtb race In Jan.
Jamey and i would like to see more Uni riders enter… less than 79 entries available. Pure Wildside love the idea of Uni Riders in their Mtb race!!

All going well with the Al flat saddle the engineer says it will be plenty strong enough with the lip around the base and i have chosen to weld the top KH adjustable plate to the underside of the saddle. Providing the KH Adj seatpost mount material is not some kind of cast that is too hard to weld.

I love Pete’s carbon flatfish master pieces but is Aluminum an option not to be shrugged at?

How much do they weight? How stiff compared to carbon? Price? I am super curious

Yes, aluminum is an option, I considerd having one made, also considered doing it in Ti.

Only part needs attention is the threaded inserts. I think it sinks up into the KH slim foam a bit too much but no problems thus far. Either my butt is way wide or they just dont poke out where the sit bones normally well…sit.
I will work out something closer to Petes nnc inserts he uses. they look awesome

Its a bit weighty, unsure exactly but bomb proof. I will give you my Guni if you bend this seat frame doing some crazy drop or something if you dont loose your manhood in the process…

Cost 100AUD took them about 1.5hr to make up. I will get a few more made up for all my KH unis but if you are handy on the tools and got a Mig riders could make their own easy and cheap.

Out to Kris, I hope he liked my true 700c Guni recently. In the future of evolution i hope flat saddles and foam will soon become a standard or optional part of KH products.

Over 200km in 4 days. who can pass up that opportunity!

Pictures as requested, Thanks for the inspirations by many on this forum! 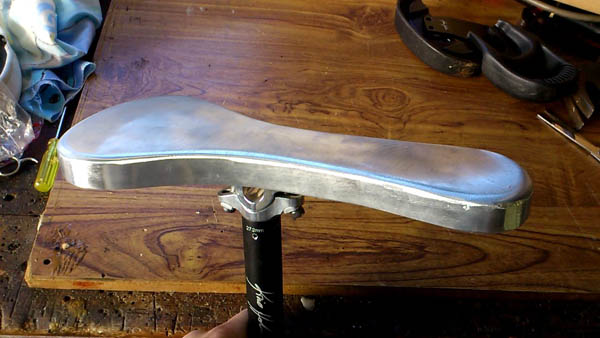 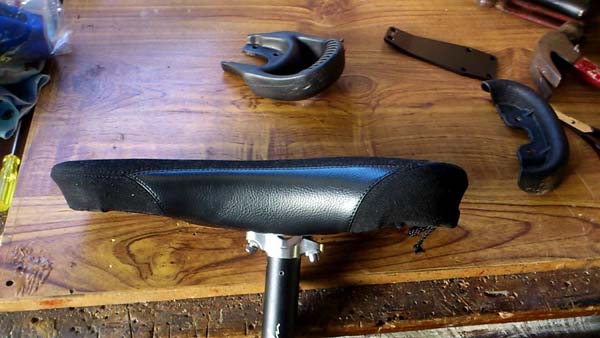 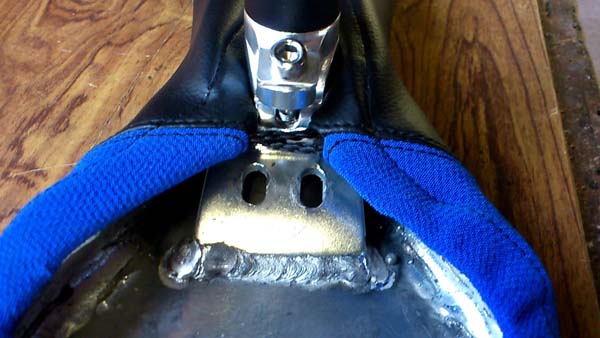 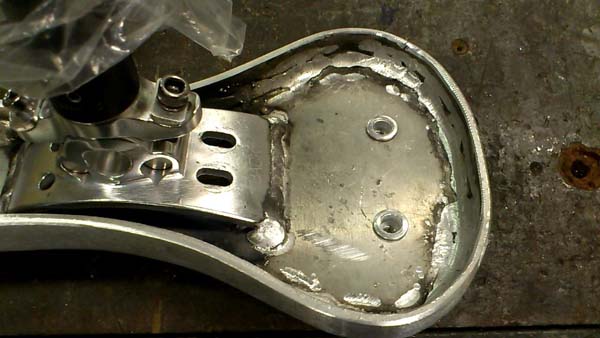 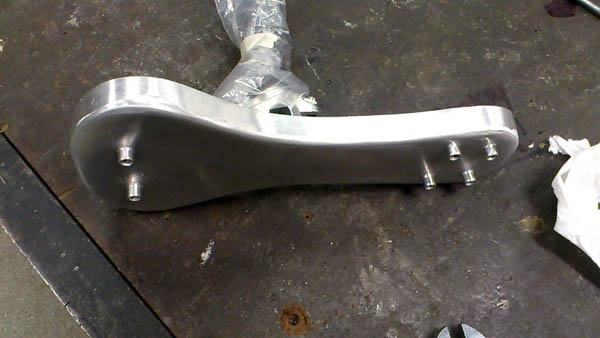 Found some thread inserts today to put in so it doensnt poke so far up into the foam.

Also Mark had a great idea why dont saddles have the relief channel in the base not the foam?

Given this i will get cut some 1/2 or 3/4 pipe down its length and create a rounded channel along the full center of the aluminum saddle. should be near everything i want in a saddle. except the weight. might make the next one from 3 or 4mm material. Or drill out some material.

Bet ya I can bend one

Watch out what you say…

Looks like a cool project. My 2c worth is that I don’t think welding the top-plate of a KH Adjustable seatpost onto the seat base is a good idea. These top-plates can break and if/when yours does you’ll have a bit of a problem. If you made it along the lines of Scott Wallis’s base you could bolt the top-plate directly to the saddle base.

Or adaptor to flat saddle like D-shaped bushing :o

Point taken re: KH post mount. Sounds like it needs attention in this area to kill the monster before its to big figuratively speaking

Mark and Tony has mentioned about this and getting a small piece of curved material welded under the saddle around the channel or pipe to bolt just the Kh seat post directly sounds better which i think i follow what your saying.

Great idea, im on it! Just made a model of the channeled saddle frame earlier so i will change it for a direct mount seat post as you guys suggest.

I wish i could make a carbon master piece like the pros. They do look very very nice, stiff and light.

Thanks for the input, comments are exactly what i was hoping for. I will re visit my guys and have MKII made up within the next week.

Price will begin to cost me more to get made. At this point honestly if you want a great flat stiff saddle email Pete for a custom hand made Flatfish.

Pete’s email ( i hope he doesnt mind me saying is )

Price will begin to cost me more to get made. At this point honestly if you want a great flat stiff saddle email Pete for a custom hand made Flatfish.

Those top plates do break, but so far I have only broken one, and it could have been fixed. I’d be more concerned with the plate breaking when welded to the base as it no longer flexes with the seat; aluminum doesn’t bend so much as break.

May be you can try rail type saddle mount? Will it be easier to do with alu saddle?

they are all valid and good options for the seat post amedment.

But i would like to know under which circumstances these brackets crack?

A few of us seem to have broken them. but when and why did it let go?

could do some rails. wouldnt the plate be stronger than this if mounted flush (no gap under the middle of it) like the pics? 8mm aluminum rod unsure but idea is good. Run any post in that case or the Kh rail post for long as they are in production.

I could never wait for a mass produced flat saddle!!! when is that going to be??? could be years away and by then i would have turned my Unis into boat anchors due to being so uncomfortable and never being totally happy with it.

Also found a nice link explaining the health benefits of not so much flat but what the relief channel is intended for and ergonomic saddle designs. well worth a read. specially if you still want to be good later going into your 50’s.
This article is by a sports scientist/ triathlete

What’s with the flat seats?
Are they more comfy? If so why have they been curved all these years?

The one negative I’ve noticed with the flat saddle is that it tends to want to slip out from under me during even semi seat-out climbing. At least that’s the case with my 36er when climbing up the steep beach ramps. It could also have something do with the fact that I’m holding the t-handle at that point since the lift handle is not accessible. This never happened though with the KH FFR saddle. While less curvy than other traditional saddles, there was still enough to keep the saddle under me with no backward slipping at all.

Terry, that is a great point. The bars are usually hard up against the front handle on our flat saddles… Great to see the issues coming out. Dont know how to overcome this issue. Any one can put light on this?
Saddle slipping out whilst climbing?
Un able to use front handle with touring bar?
my head hurts lol

perhaps a straightish Bar end fitted to the touring bar at the saddle nose end can substitute for not being able to use the front handle? make sense kind of??

I can take a photo of this tomorrow. and an image of my MKII model. It has the channel 2/3 of its lenght. leaving enough flat saddle section of the handles to mount flush and give it strenght overall. Underside will have a plate same pitch as the Kh post mount. Will still get it welded but it will all sit flat. Cant really bolt it easy due to the channel.

How much would it cost me to try one?

Even holding the lift handle it still wants to creep backward on steep climbs. Yes you can hold it in place but it takes attention and focus off the climb taking more out of you in the process. This is why I would NEVER use a flat saddle for climbing Fargo, for example. My total focus and all energy must be on the climb itself, not thinking about the keeping saddle from shifting about. It’s like anything else. There are tradeoffs and pros & cons to most everything.