Finally Got My Pics Of My Unicycle Trailer

HI JUST GOT THE PICS OF MY UNICYCLE TRAILER PRINTED IT IS ONLY A PROTOTYPE BUT WHAT DO YOU THINK?? Any chance you’ve got plans that you’d share?
Sketches or close up photos of the various parts?

I’m guessing that’s some kine of universal joint behind the seatpost?

uni-trailer?!? I see two wheels on that trailer

Here’s a smaller Picture I done for you Thinuniking.
Other than that. Good Job anyway. Re: Finally Got My Pics Of My Unicycle Trailer

Originally posted by thinuniking
HI JUST GOT THE PICS OF MY UNICYCLE TRAILER PRINTED IT IS ONLY A PROTOTYPE BUT WHAT DO YOU THINK??

I think it takes transportation to new levels of absurdity and for that reason, love it. It looks perfect for hauling juggling clubs and a ball for headers. Or lengthen it and you can drag your impractical bicycle along.

Imagine how different American history would be if the pioneers had used these, too.

as i said in the other thread it is only a prototype so the real thing has lights for in the dark as it is a electrics project but no it is not that simple they come on only when it is riden and only in the dark.i am also toying with gloves that when you press say the thumb and little finger to gether it would indercate left and tumb and middle finger indercate right.the final idea is made out of metal.also if you could write in any tiles eg trials world champ or what ever it will be helpful as it can go in my school portfolio to say who ever said they thinks it is good.as i said this baby most likely would not go on sale but is i had a few intested that would buy them it could be done!also how much would you pay for it ?
just make sure you know this is a SCHOOL PROJECT.

Have you tried it on the giraffe? That’s a sight I’d love to see…

the design of the new attaching mechanisem will not let me do this but the prototype would i did think about it although if you fell off god only knows what would of happened and to the person who said it is a three wheeler the uni has all the planes of movement as it would normally!

indercate=indicate
tumb=thumb
intested=interested
tile=title
sorry about spelling in last post i just used my master spelling checker but i like to call him dad i was in a rush and did not have time to check the other night.
ben

hats really cool. i tryed i long time ago to make a one wheel one for my roadb*ke didnt work to well.

We are happy to send you the first official IUF newsletter today. It is our goal to keep you updated with IUF work, important events and interesting stories around the sport of unicycling. …

Unicyclist are so special, makes me proud to be a member of this group…

Unicyclist are so special, makes me proud to be a member of this group…

Sometimes I wonder if the entire sport of Unicycling was invented to test the breaking point of people’s troll-senses… It’s like we’re daring the rest of the world to laugh! :D:D

I also was trying using a trailer on my 36.Schlumpf and was surprised how well does it works.
Only freemount with more then 5kg on trailer is quite hard 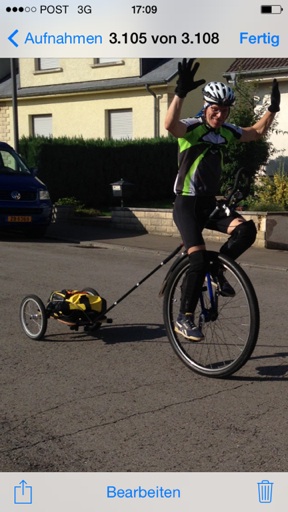 Thanks for the pic, Mono. That looks really nice.

I’m just odd enough that I have been thinking about the whole 36er and trailer thing recently, but have not been able to work out some of the details. How is your pole connected to the trailer so that the nose of the trailer doesn’t just dive into the ground? How are you attaching the pole to you or the uni? I’d love some close-ups if you don’t mind.

Love it regardless whether works or not