Uni friends - please be on the lookout for 2 stolen unicycles. These were taken from my garage in Ventura, CA on the night of Oct. 16-17, 2016. If anybody is offered a used unicycle for sale, or if you see them pop up at your local pawn shop or used bike shops, please let me know or contact police. You can reference Ventura Police Department report# LVE16-401460. Both of these unicycles are particularly precious to me. Any information would be very much appreciated.

36” KH with Shlumpf hub (Custom built by Silva Cycles)
-ISIS Schlumpf Hub - serial # 0560
-The frame has a custom black powder coat paint job
-Disk brake
-KH Moment cranks with two hole positions - 125/150
-KH extended handle
-Custom stickers on the frame with the name “Space Cruiser” - though it’s very possible these stickers have been removed by the thief.
—A few notes to help spot it. It’s likely that the thief doesn’t know anything about unicycles. They may think that “Space Cruiser” is a model name. But, those are custom stickers that I made. Also, it has a Foss tube, so it loses pressure after several days. The thief may think that it simply has a flat tire. Damn, the space cruiser has been stolen, I feel very sorry for you.
Keep hope though.

Here in France someone had a 29er stolen, few months later I saw it in the French equivalent of kraig’s list, reported that on our french forum and finally the guy got his uni back.
The uni was customized which helped.

Your g36 is customized and has got a schlumpf hub with a serial number so I hope you will have the same luck as the other ones who have got their uni back.

Really sorry to hear about this. I’ve been robbed a few times, and it’s a terrible feeling. I hope you’re able to recover them.

I also posted links to this post on a couple of unicycle groups on Facebook: Unicycle Chat, and Strictly 40+ unicyclists. Hopefully, someone out there will spot them.

wow that really sucks. My family had been making jokes about that, that it would be quite difficult for the thieves to ride away on my unis should they take them. It is already hard to find fellow unicyclists in the neighbourhood.

I had my muni stolen a year ago. I feel your pain, anger, resentment, etc.

Sorry to hear about it, Nick. People will steal anything. I checked eBay and the Seattle area Craigslist but have not seen them. It’s only been 4 days since they were missing, though. I don’t know of another method of moving this kind of stolen merchandise that can be tracked. Did the Ventura police contact local bike shops? Keep bumping the thread until you find them.

Shall we meet for lunch in Snoqualmie again in 2017?

Great news - both unicycles have been recovered by Ventura Police. They were ditched behind a gas station.

Thanks for everybody’s contributions and messages. They’re back home, safe (and under video surveillance). 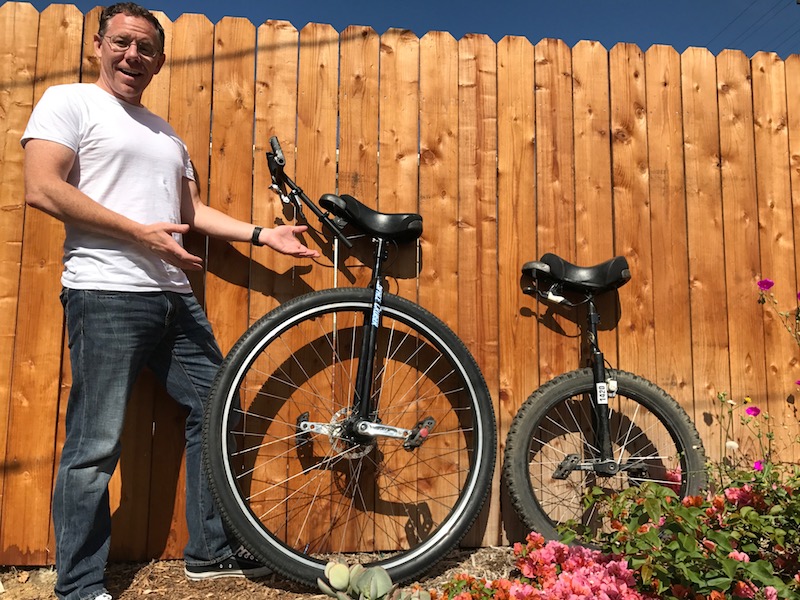 That’s fantastic! I love a story with a happy ending.

Yeah, great news !!
You see, I told you to keep hope

Great!
Hang them in the bedroom, that’s the safest place!

Ahhh wonderful! I’m glad you’ve got them back

WHAT? You already found the gas station where I hid them? How am I going to fence those gems, now?

Great!
Hang them in the bedroom, that’s the safest place!

Hooray! Hang them inside, Hang the culprits outside!

This story illustrates that unicycles are pretty useless to anyone but the few people who know how to ride them. Anybody who would steal one probably has other things on his or her mind than learning to ride -like quickly selling it for some crack, to someone else who also doesn’t know how to ride!

The Internet makes unicycles slightly more negotiable items, I guess, because it allows the few people who want to ride them to locate them more efficiently, but trying to sell stolen unicycles on the Internet would be unwise, especially if they are easily-recognizable monster unicycles like the ones in this story. So it’s really not that surprising that the thieves ditched them as soon as they had a moment to reflect on their situation.

It could almost be a scene in River’s Edge, with some kids slowly coming off their high: “Dude, what are we gonna do with these things?”

That’s awesome! So glad you got them back, and so quickly! Yay!

Now that they’re back, I can make a bad joke:

Someone stole your other other wheel.

Whenever I leave my unicycle unlocked outside of a cafe or anything it gives me a little hope that I could run after who ever might steal it. Considering most people have no damn clue how to ride one :). Happy you got reunited with yours! The theif probably just gave up trying to figure out what it was.